Now approaching its tenth year, the EVE Online player community has matured into an intricate and multi-faceted society viewed with envy by other game developers, but is frequently regarded with suspicion by the wider gaming community.

Is this perception deserved? Should "The Nation of EVE" be concerned by its public identity and if so how might that be improved? What influence will the integration of the DUST 514 community have on this culture in the future?

[Unrelated and random bonus question sponsored by EVE News 24: What single button would you recommend be included on an EVE-specific keyboard?]

Being a blogger, I do research of course and the VAST majority of verbiage put out about EVE is in blogs like mine and the MMO gaming media, IE Massively, The Escapist, TenTonHammer etc., and not all of them either unless it’s a piece about how vicious and hard and harsh EVE is, or coverage of Player Riots or Chairman Faux pas, but…

In just one Googling of “EVE Online articles” I found the following… EVE is in 11 New York Times articles from ’05 to ‘11…  3 are about EVE, in the rest we are mentioned in part.

These are all fair, well written and non negative pieces. So there has been some occasional mention of us in the greater out there.

First, a Question, Where Do We Fit in, in the MMO World?

IMHO, EVE sells to a very unique niche market. It is like Theoretical Physics or Sasquatch Hunting or Alien Autopsy… notta lotta people dooin it but them as do are very passionate about it. And yea, +300K accounts seems like a lot, but…

I have found some very interesting statistics from the good people over at MMOData.Net… (and CCP is a contributor to this site) so with I offer for your edification… 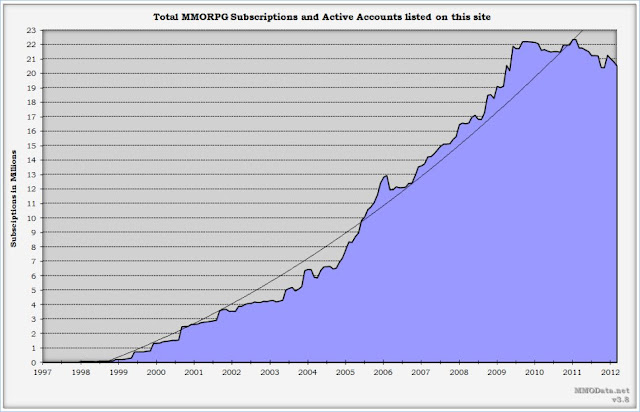 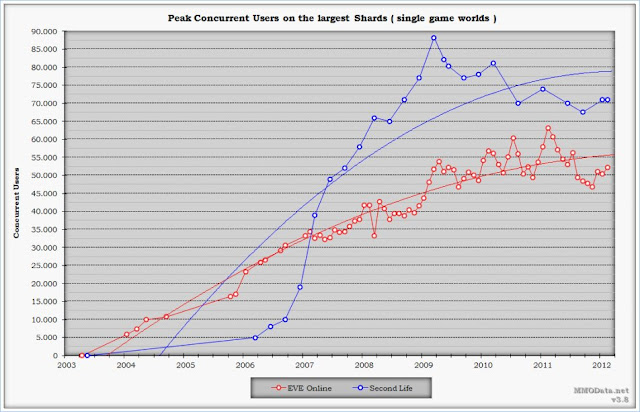 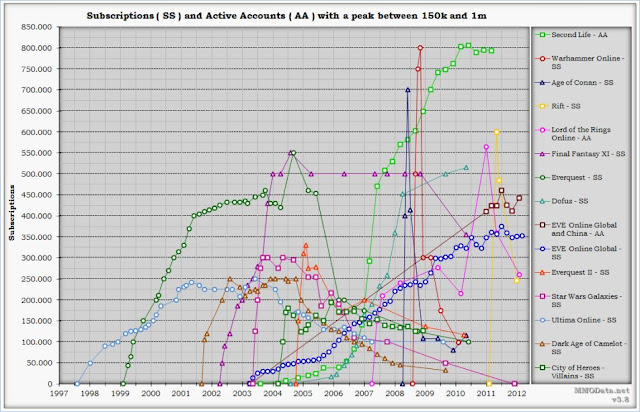 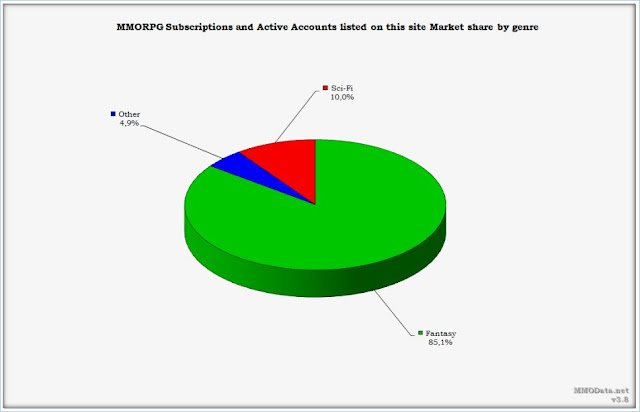 So… where does this leave us? Simply as I stated, EVE is a Very Unique Niche MMO…

Even with the articles I googled up above, I can’t say I believe the Mass Market gaming community really knows a lot about us beyond, maybe, the following…

· EVE IS Harsh and Hard and Difficult and Deadly;
· Griefing IS allowed and even, to a degree, supported by CCP and a large segment of players;
· EVE Is NOT “safe”, your Stuff is NOT “safe”, YOU are not “safe”… not really, not anywhere at any time;
· Undock and you risk your ship, mods, cargo and even skills;
· Make friends, join a corp, join an Alliance and you risk everything, period;
· And, while EVE may or may not be Real, Loss IN EVE is very, very real.

Not exactly the kinda advertising that brings in droves of new players.

And in this is the crux of the matter and the truth in the larger perception… and why EVE will never be WoW, why EVE will never be a Main Stream Mass Market MMORPG written up in the glossy mags and chatted about extensively in the mass media… Not as long as EVE is allowed to remain the harsh, hard, deadly, costly and unsafe sandbox we all love so much.

The majority of gamers, young or old, want (lower case) excitement, most want (lower case) danger… They all want to be (all caps) Unbeatable Hero’s… and there is no such thing in EVE. Most gamers dunt mind (too much) when their toon ‘dies’ but under NO circumstances will they accept losing any of the Stuff they have worked so hard to collect. And most gamers will NOT accept griefing at all, much less anywhere near the scale that is accepted as normal game play in EVE.

In EVE we do not log on to relax, escape and while away a few hours in a situation where we are all Hero’s… We log on because it is a CHALLENGE to live in EVE, because it IS Hard, and Harsh and we know the VALUE that real loss can give to the hours we spend flying these deadly skies…

Which leaves me with my personal subjective summation…

Who in EVE cares what others think?
Think about it… OK, that said, now for a moar objective view…

Can we (IE CCP & the player base) improve this perception?

Well… in a word, no. Not if we want EVE to remain “EVE”. Allow it to change into something safer, softer, moar protected… then yes, you will see a version of EVE capable of courting the mass market... but you wunt see me in the skies of that EVE.

Maybe that’s the solution… Create a NEW single shard server, call it… what? “Fastidious”, copy EVE to it, edit this version to make it a carebear centric game and offer it F2P (like Dust) as “EVE Lite” or some such…?  Nawww...

I have not spent much time pondering how Dust will affect EVE as I have heard that Dusters will probably not be deployed in W-Space… without Sov, why would they? So they may not impact my larger game all that much (yes I am in null ATM, but I dunt plan on living here forever, holes is my home)…

I am concerned about how deeply this ‘integration of the DUST 514’ community will go. As a F2P game Dusters will quite probably have a higher number younger players, quite possibly a substantially higher number… And I do not see the amount of Griefing and general “adult” level nonsense that goes on in EVE as being acceptable to Sony. CCP will have to tread very, very carefully on how things like the possibility of ‘Orbital Ganking’ and other Pilot on Duster Griefing tactics and similar emergent play are handled.

…I must to wait and see.

New button? How about [Enable Joystick]?

And no, I do not mean a “tactical flight view”, I mean enable joystick use for manual flight while retaining the current main view as is. I hate manual flight by carpleclicking all over the screen.

“The brainchild of the Blogfather, Crazy Kinux, blog banters are single subjects discussed across the EVE blogging community. It encourages the sharing of ideas and cross-pollination of readership. All in all a healthy thing for a community.“
Posted by Turamarth Elrandir at 4/17/2012 01:48:00 AM