My dad always told me, “Aim high, always set your goals higher than you believe you can achieve… and you will always surprise yourself.” IMHO we have done just that.

Now this is not a PvP story… this is a PvE story. But, ya gotta do some kinda PvE, market, industry, missions, mining or sites, to afford to PvP, so it is part and parcel of life in EVE…

As any who visit here know I am a wormholer at heart, I found wormholes early in my evelife and I found my place, my space and my happy and home in this great game. Wormholes, W-space or Anoikis as ‘tis properly named for them as are learned in such matters, have 6 classes; C1, easiest through C6 hardest. Now keep in mind the sites in a C1, the ‘easiest’ class of holes, are considered on par with some L3 missions, even some L4s… so set your subjective hardness scale accordingly.

I have lived in a C1, C2, two C3’s and a C6. I have flown PvP ops, run sites, mined ores, sucked gas and PI’ed in all classes for almost 4 years now. We currently live inna C3/Lo/BlackHole system. This means a Class 3 wormhole, with a Static Losec entry, tagged as U210, and it is a Black Hole system so we have "weather”… IE the Black Hole in our system has the following effects on ship systems; 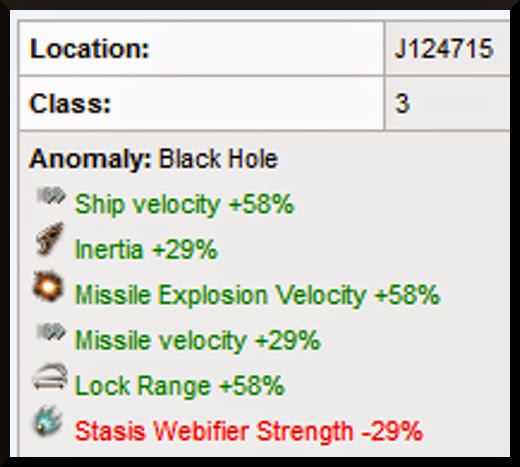 
Anyway we have, of course, the standard C3 sites… Combat sites (Cosmic Anomalies), Data site (Radar), Relic sites (Magnetometric), Ore sites (Gravimetric) and Gas sites (Ladar) as detailed here. And as always, we raid any holes we connect to or scan down in Empire, from C1 thru C4. But lately, as we are all getting higher skilled and more experienced, Sov has been crunching numbers and decided we should try the lower DPS C5 sites.

Well, we did and we did fine as I wroten about here. We even had a new bro with us inna Hurricane and we ran the site fine. So we are actively seeking C5s with the right ‘conditions’. Preferably an unoccupied hole, of course, but an ‘inactive’ hole works too, and, of course, lots of sites in the sky… which is always a strong indicator of inactive or AFK owners, and good connectivity to our home, so the haul out will be as safe as we can make it… such as right next door or 1 or 2 inactive connecting holes, or similarly inactiveish connecting lows… But mostly lots of sites… lots of sites means low activity, and of course, lot of ISK to be made.

So, last night Sov found us a C5 via 1 connecting C4, J130037 a C5/C5. Active POSes but no one home and something over 15 sites ripe for the picking. Sov’s only worry was that in the highest DPS spawns we would possibly need 3 logi which for a small gang like us, significantly reduced our DPS. So we started with x2 Basi’s and 1 Scimi and for DPS we had our std x2 Ishtars… then Sov added a new bro from a noob corp (that he had kilt and befriended in his usual style) so once again we had a T1 Hurricane flow by a newbro join us inna C5, LOL.

Anyhoo, we got in and started on the lower DPS sites and ran them all. Took a break, Scooped-n-Looted all the MTUs and Noctised up all the slavage and dropped it all safely back in our POS… very near 2 bil ISK for a few hours of fun flying with friends… and we weren’t done yet, not bad, not bad at all.

Then Zaxx, our guest newbro had to split and we went back and tried the harder sites this time… sorta as a test. Sovs mathing said we could do it with just the 2 Basis, but in one wave in particular, 5 BSes (plus cruisers and frigs) the alpha numbers had the potential to break one of us, and if it was one of the logi, well, things would get shall we say, ‘interesting’, from there on for the rest. Tsra, in the Scimi, was going to try and hold off on reps unless absolutely needed to see if the dual Basi’s can support our gang.

So we get to the spawn point and… we did fine. The thing most in our favor for using just the dual Basi setup is the whole spawn is at range and there are no initial webs or scrams so all ships, especially logi, were able to keep their transversal up, which of course mitigates some of the incoming DPS. This allowed us tank the BSes until the DPS guys took down 1 or 2 which put us back at a safe level of manageable DPS.

Oh there were a few times when either Endy or I got hit pretty hard… and once in an earlier site we had to put the Armor Rep drones on Zaxx, our intrepid noob Hurricane pilot… but we were never really at a great risk of losing a ship or the fleet as long as (1) everyone kept his head in the game and (2) we dint get hot dropped… and  we all are good at the first and there’s fuk all we can do about the second… it’s Anoikis , no local.

We did however catch sight of a Manticore on dscan in the C5 at one point, and I am pleased as hell with our, can I say, professional response… Everyone reacted well, the fleet was moved out and safed up back home quickly and on the bounce, we reshipped up to PvP ships while our cloaky scouts did their thing, put people at key positions and were able to confirm the ID and exit hole of the intruder.

After a little research and deliberation, it was jointly agreed with a high degree of confidence that he was probably a solo bomber pilot looking for a bit of fun and not an advance scout for anything moar serious. So we went back to running the rest of the sites and completed them all.

Tsra was designated hacker and started on the hacking sites… which were according to him a blue balled bich… and at the levels of ISK we were pulling in L&S the sites, not worth the effort an time… and we were leaving something like 50ish million ISK behind. I have never heard ‘50m ISK’ described as ‘not worth this effort’… but it really wasn’t.

Last I remember I was sittin at 50km cloaked inna Falcon on overwatch on Tsra while his OCD forced him to try and finish what he started… then I woke up to Sov saying “Tur, go to bed.” Which I promptly and happily did…

Woke this morn and out of curiosity, and with my OCD whispering “You dint do PI last night…” in my ear I logged on and… well, looks like my next 30 days in EVE are paid for… once I get out to hisec and buy that PLEX I can now afford…   =]