It seems like our Alliance has been constantly at war since shortly after our corp joined… You know how it is… The bigger you get the more enticing you become as a target. While we’ve lost some ships and I$K, we have also had our share of victories too. We have never come anywhere close, as member corps or as an Alliance to being financially broken.

We all logon at our usual times for whatever time zone we live in, we usually fleet up if/when there are enough of us, get someone to run a locator agent to find the whereabouts of any WTs (War Targets) who are online, and try to take the fight to them. Either engage them in battle if at all possible or ambush them at gates and stations and warpables, or camp them in station. They, so far, have always been smaller non allied corps and use hit and run tactics, preferring 2 and 3v1 kills on solo targets.
We have been able to put together 10 to 15 man fleets regularly and they so far have not wanted anything to do with that level of fighting. So they peck away at those who don’t listen, them as what don’t take it seriously or the few who get so bored and so pissed off and so fed up with the whole dayum thing that they sneak out solo to run a mission or 2 or get some mining done to make some I$K… and far too often those are the ones who get caught and killed by the WTs…
I am one of those.
Of my 2 losses in the last war, one was out of being bored and pissed off at the constant dull, mindless, seemingly useless WAITING for something, anything, to happen… There were no WTs in local, so I hopped into my speed tanked Tackle Stabber, undocked and warped to a gate to do a little ‘scouting’ around… I jumped through and “OH SHEEEEIT!!” (first you say it… then you do it) there were 2 WT camping the gate and as I landed they launched drones and waited for my jump cloak to expire or for me to try and run or attack. Now the sudden sight of 2 Blood RED Flashing ships and their 10 Blood RED Flashing drones is enough to flat unnerve most pilots… I had 60 seconds ticking away until my ship de-cloaked…
What you are SUPPOSED to use those precious 60 whole seconds of jump cloak for:
(1)     [2 seconds] Take a breath, GET A GRIP and…
(2)    [20 seconds] assess the tactical situation: ship types, numbers and
distances; drone types, numbers and distances;
(3)    [20 seconds] create possible responses;
(4)    [10 seconds] choose a response  and prep for it;
(5)    [8 seconds] break cloak and implement response;
a.       Now while you are doing steps 1 thru 5 you are also supposed to be calmly requesting assistance from your corp and Alliance mates on TS (or Vent or whatever)… and keepin up a running status report of your exact location and the intel from Steps 2, 3 & 4.
Did I calmly raise one eyebrow and coldly calculate my odds? Did I assess the situation and snap out commands instilling in my crew the Steel Cold Certainty that I was the guy with The Right Stuff and I would Lead Them to Victory??  Did I go all James T. with my bad self??? 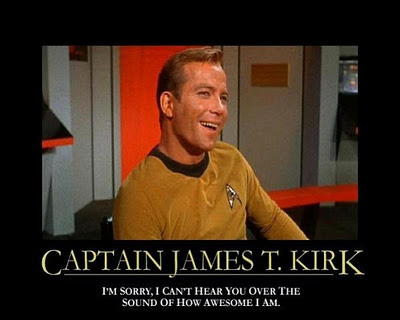 Nope, not me… I shit my pod and ran.
In the 1st few seconds after my screen cleared I picked a location in the sky <<<AWAY<<< from the FLASHING RED DETH and went to full MWD. I ran as fast as my Stabber would go gibbering like a Capuchin monkey carryin an egg… with momma cobra on his ass and closing FAST. I didn’t do ANYTHING but run. I even remember I was actually hunched down in my chair (in my kitchen) to make “me” a smaller target…  just like that stoopid monkey.
Strangely enough, as best I ‘member it (not well I’ll tell ya) I mighta made it too… I got away from one ship and his drones and the other guy only got me because his drones were able to stay in range long enough to deal the last of the 5031 Damage needed to break my Stabber’s paltry tank.
Had I been the steely eyed James T. type, I just mebbe might have been able to work out the following…
(1)     one Hurricane, range approx 10KM, 5 Warrior II drones in orbit;
(2)    one Drake, range approx 20KM, 5 Hornet ECM drones in orbit;
(3)    possible responses:
a.       The tactical situation left one viable option path only, it had to be a fighting escape.
i.      wait down the timer and see if the range opens up – if NO:
1.       run to gate jump range;
ii.      wait down the timer and see if the range opens up – if YES:
1.       attempt to warp away while webbing & firing on the ECM drones;
2.       attempt to warp away while webbing & firing on the Warrior drones;
See, if I had just STOPPED, taken a deep breath and thought it out even a little I could have used my speed to my advantage… you know, the way yer SUPPOSED to with a SPEED TANK.
I.                    Close w/ them using my speed to out transverse the ‘Canes guns and (mebbe) the Duck's missiles while trying to get in jump range of the gate.
II.                  Run from them fast enough to warp out while fighting off the drones which are the bigger threat due to their speed.
As stated I did NOT do any of the steps above regardless of the actual time involved. Now I am purty sure I’m gonna take moar than a little abuse from my corpmates and allies for the above description of my Heroic (NOT) Actions… but I know from past experience that I am not the only one who can get overwhelmed by the sheer intensity of PvP in EVE. 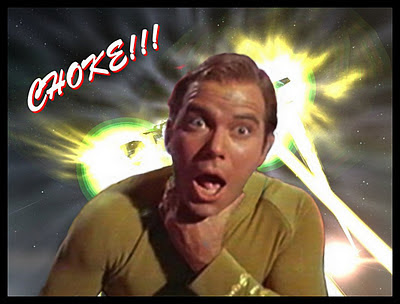 I find it interesting, now that I have enough experience, both losses and wins, to have… call it and Emotional Subjective Reference for PvP in EVE and I cannot for the life of me understand why it is so much more of an adrenal rush than any PvP I have ever taken part in… and I cut my gaming teeth on 1st person shooters and as soon as I discovered PvP in them I NEVER went back to PvE… it was simply too damn much fun killin yer friends over and over, again and again.
But I NEVER got the shakes like I, and so many I have talked to do, when faced with a live attacking player in EVE. I simply don’t get it. I mean in say, Quake or Halo YOU are the guy… it’s YOUR hand holding the gun, it’s YOUR blood and guts splashed on the walls after a rocket blows YOUR ass into giblets… In EVE you don’t even see yourself… you are in a ship and the ship is all you see… never any blood or guts and in space, no one can hear you scream. Yet… I get more totally overamped when I see a flashing RED icon than I do when wheelin in my Jeep in RL and I push the off camber till I am sure I’m gonna roll over (haven’t yet, knock on wood).
If you follow my blog you know my first kill was a 2v1 attack by myself and an ally on what later turned out to be a noob flying an unarmed mining frigate. Yet I simply cannot tell you how badly I was shaking after the short sharp ship kill and podding. Afterwards It was physically hard to work the mouse… my ally, who had been ingame slightly longer than I was in the same shape… exhilarated, heart pounding and shaking like a leaf.
I want to get better at PvP… but like training for a gun fight against paper targets, shooting at your friends who will not pod you is simply not the same as seeing those flashing RED icons on screen. I have to get out there and DO IT… and find a way to wrest self control back from the adrenal rush and use my brain instead of instincts..  I need to get all James T. with my bad self… 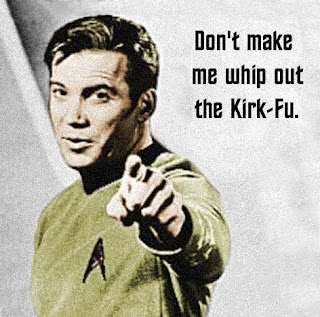