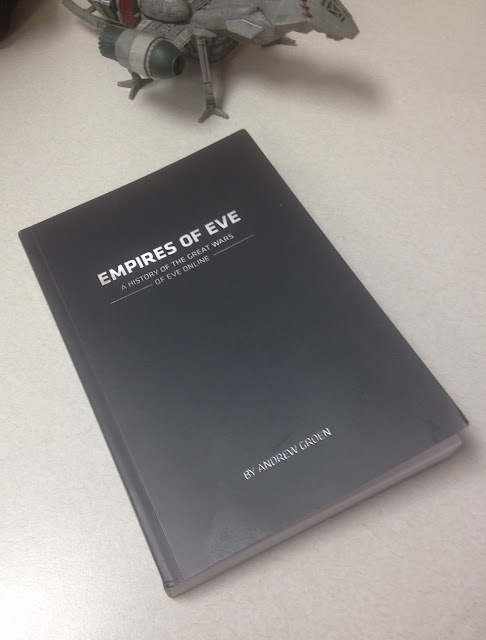 I was one of the 3116… the total of us who contributed to Andrew Groen’s Kickstarter campaign to write a History of the Great Wars of EVE Online. This history covers the early years of the settling of New Eden’s null sec regions from Alpha and Beta to initial release in 2003 to 2009.

I received this mid last week and was going to post this that night… but I started reading it and, well… so you’re getting the news as ‘twere now.  =P

“Ascendant Frontier had actually been so efficient that it had finished building the Titan before CCP Games had finished all of the code to implement Titans into the game. These ships were such colossal undertakings that CCP assumed they had time to complete the code before anybody could actually build one. The bit of code that allowed Titans to be launched from a capitol shipyard hadn’t been written yet.

Within two minutes (after the ship had supposedly completed) CCP developers were on the scene and privately met with CYVOK (CEO of Ascendant Frontier). They audited the build operations, verified that everything needed for the construction was present, and manually materialized an Avatar titan next to the shipyard.”

For me, as a veteran of 5+ years ingame it is not the great sweep of event’s, not the naming of names that grabs my interest… those of you who know me know I have no love lost for nullsec its denizens or gameplay… I am a wormholer, a resident for nearly all of my EVE life of the greatest space in EVE… Wormholes, AKA Anoikis. So I care little for much that takes place on the other side of the sky from my beloved home.

No, nullsec itself means little to me… BUT, the GAME means everything. And stuff like the above little tid-bit… well, that shit just thrills me and Andrew’s book was WELL worth the money invested… plus, I sent in $25… and the MSRP? $24.99…  LOL