BB68: Flying the Deadly Skies on Ductape and a Prayer...


Welcome to the continuing monthly EVE Blog Banters and our 68th edition! For more details about what the blog banters are please visit the Blog Banters Page.

BB68: This is my Rig, There are Many Like it...
What do you play Eve on? I'll show you mine if you show me yours! Are you pew-pewing on a laptop? Plotting universal domination on a 12 monitor set up? Mining away on a 50" TV? Is your set up located where your other half can speak to you or do you lock yourself away for hours in your Eve themed shed? How do you play your important internet spaceships?

I really enjoy this one and it kinda makes the rounds every year or so… the last time we did this was Dec 23rd last year. My situation really hasn’t changed much in the last year, so here is how I still do it...   =]

I’m most often setup in the pub… yes, I said Pub. I married a Brit so a 'bar' is the thing behind me one sets one's pint, or in my case a Ruum n Quafe, on and leans against whence pontificating... and a 'Pub' is the place where the ‘bar’ is... (though I sometimes move everything and setup at the kitchen table just for ‘cause… anyhoo)... 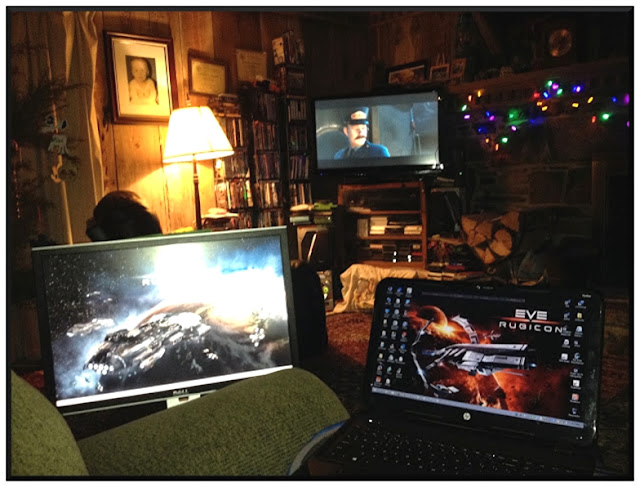 The Rig:
My system is still the same maxed out nothing-special-here 5ish year old HP Sleekbook 15 w/  1.7 GHz Intel Core i5-3317U-3 MB L3 cache/8GB DDR3 RAM sittin onna lapdesk as the years and gravity combined with my ass, and multiple Ruum ‘n Quafe’s, have worked together to slowly conform my "spot" to absolute perfection on the sectional sofa...  ahhhhhh...  =]

"Blog Banters" are brought to you… now… by the Good Folks at...

“Sand, Cider and Spaceships” by Drackarn

“The brainchild of the Blogfather, Crazy Kinux, blog banters are single subjects discussed across the EVE blogging community. It encourages the sharing of ideas and cross-pollination of readership. All in all a healthy thing for any community.“


You know how I’ve said in the past that I like that CCP keeps changing things up, keeping the game fresh, and keeping us learning and striving…?? yeah, well… not always. You see CCP is now going to let us rip out and sell… knowledge.

Why? Because EVE is a niche game, a very niche game. The guys who started CCP and created EVE wanted a game similar to Ultima Online… with the same gritty, real, harsh, open world, in-your-face almost completely unrestricted PVP gameplay… just set in Space and as cutting edge as possible.

And it is all that and more… it really really is. And that’s the rub. Because of the gritty, real, harsh, open world, in-your-face almost completely unrestricted spying, lying, scamming, ganking, blobbing PVP gameplay, EVE is quite simply limited in the number of gamers who are going to want to play in such an environment. It’s just the way people are.

Statistically speaking (300k EVE to 8mil WoW) very few gamers are also going to spend money to play the game described above especially when you add in EVE’s form of Levelling, IE Book Skills plus Human Skills. Book Skilling takes ‘real’ time and can cost huge amounts of ISK and unlike other MMOs, the live player must also learn some seriously in-depth skills that are NOT at all your std WASD, ‘twitch based’, move and shoot mechanics… He needs these new skills in order to understand and use what Book Skills give his toon and they take real effort to learn…

Both Book and Human Skills are absolutely necessary for a player to be able to “Level Up” in EVE and effectively Fly and Fight better ships and fits and Gather and Create to increase and improve ISK generation so he can afford those better ships and fits … And in a game where after all that Skilling and Learning and Gathering and Creating and Investing ‘in’ the game… the Risk and Loss are Real aspect combined with the almost completely Unrestricted PVP aspect… can obliterate months, even YEARS of effort… very real effort, in a matter of seconds.

You have to admit… EVE players are a weird bunch even for gamers so as such there are even fewer of us. Hence EVE (and CCP) has a sort of ‘cap’ on its potential total playerbase (IE profitability) built into the game’s very core mechanics.

And this sucks. Because those of us invested in the game are invested BECAUSE it is a niche game that fits our mentality… our desire for an open world, our desire for real freedom and for something of real value in a game… ‘real value’ you ask? Yes… because Risk and Loss are Real and because in order to have anything in EVE one has to work and fight for it… fight other players, learn and work the games mechanics, and claw and fight your way up the vaunted skill cliff… so what you make and do in EVE has VALUE to you. And because it all can be permanently lost, stolen or destroyed… that gives greater value to creation and ownership. 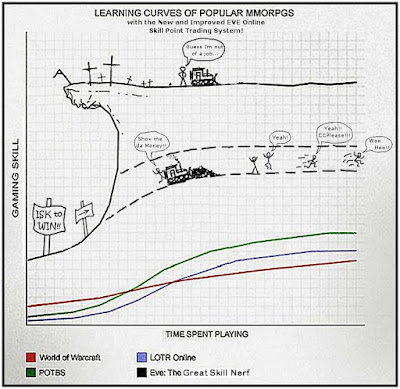 And we have all seen the PCU charts… the one that got me most was the one below from MMOData, which went dark in June ’14 cause it was getting increasingly difficult to get any useful numbers from the various game companies. And in a very sad note it was stated, “As for the only growing subscription based MMORPG left, EVE Online, I no longer receive subscription numbers. CCP no longer responds to my requests.” Rather telling in and of itself. 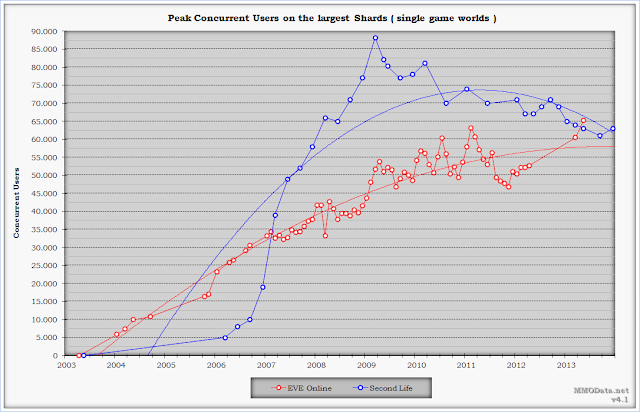 But at that time we had this. Just look at that red curve… if this was a true bell curve then we were at the apex at the end of 2014 and that boded very well for at least the next 4 years and it would mean EVE would not “die” until sometime near 2025…

I wrote at the time that I felt EVE was maturing, reaching the plateau of its “middle years”. What others saw was “If it aint growing… It’s dying!” but I disagreed… I felt we had potentially reached a state of maturity for our very niche game.

That CCP may have already signed up basically all the players (at least in this generation) who are willing to pay to play this very different kind of MMO was a bit of a worry TBH, but I felt that was OK as we are a VERY dedicated playerbase… and the slow losses to this and that would be balanced by those like us coming up in the gaming world… those who wanted something more, something different... that was my hope anyway.

But again, if we look at the following chart from I snagged today from EVE Offline for the Tranquility server, we see a roughly similar curve… with what looks like approx. 2012 as the apex of the bell. 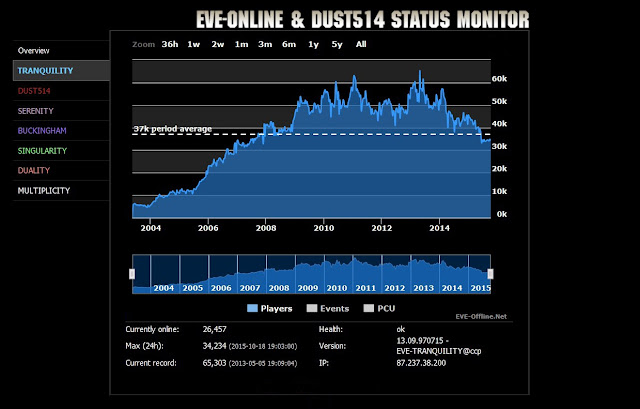 Sigh…. doesn’t look good huh? Yeah… me neither. (Vince is gonna be ALL over this one I bet.)

Anyway, CCP shutting up about subs and shutting down the numbers they used to so proudly publish, and the… well, graphic, evidence that things are not ‘growing’ anymore… and the push to “lighten up” EVE… to make it more noob friendly and easier… I fear CCP is having a bit of a Mid Life Crisis and chasing sweet young things and fun natty sportscars... oh, and yeah, they also wanna keep the lights on and pay the bills and staff n stuff like that too...

So while all these changes 'sound' good, just don’t sit well with me when the level CCP seems to be willing to go to are, well… draconian at best.

“When this [Skill Trading] was proposed at the CSM summit, I swiveled my chair and asked if they realized that they were undoing the basic structure that characters and game progression worked under. They said that they did.”

They understand they are changing one of the CORE aspects of the game. Now this aint a new POS or a change in how far you can jump… this is a change in the core of how we are WE in the game.

CCP Seagull said change was necessary and it was time to stop being afraid of the fallout from Incarna… and I have backed her every step of the way. I even stopped myself from going full retard after the Discovery Scanner stupidity… Oh I spoke out against it, but I held my real rage in check and I worked hard to see the why and any potential upside. For the most part I held my tongue and I thought to myself, “You gotta take the bad with the good”… “Medicine, while good for you, dunt always leave a pleasant aftertaste.” and shit like that.

But this… personally, I really fear it’s a step too far. I guess we’ll see, I’m not leaving… yet.