It's MURDER Out There...

Jester wrote up how he ran a site recently... first one he says he has run in a long time... and he was overall dissapointed. Well, I know the feeling. Tur is currently doing solo time in Amarr...

SYJ has deployed to NPC Null, which as those of you who know me know is something I will only consider doing the day that is the ONLY place left to fly in EvE... and on that day I will have to face the very real possibility of giving up EvE.

Which, personally, is where I feel CCP Seagull eventually wants to take us. The fall of the (stagnant uninteresting NPC) Empires to a day when ALL of New Eden is ruled by Empyreans... IE Null from corner to corner. My ONLY hope is that Anokis will remain a bastion of freedom for those who aren't willing to cow tow to the Man... as 'he' said, "...never have to be under the heel of nobody ever again. No matter how long the arm of the Alliance(s) might get... we'll just get ourselves a little further."

So, SYJ is in Null and HBHI kinda hit a few RL rocks in the road. We're a really small corp and the majority of us have simply not been on much at all... A few went to null w/ SYJ, a few dint... I even lost damn near a whole (!gasp!) month of SKILLING due to not loggin on enough to even play Skill-Q Online.

Anyway... I have been loggin in a bit more lately... it's just, there's nothing to DO. I have been soloing L3s in a .5 near Amarr ...  well, I have been waffle stomping L3s inna .5 near Amarr actually. Inna active shield HAMgu it is like running L1's inna Typhoon... Target, Orbit, F1, F2, read blogs... it is more time murdering than killing.

And among the long list of Worse Parts of Missioning is the ISK really and truly sucks. I made 1.8m ISK for the last site I ran...  "If" I L&S, which I dunt, call it 3m ISK per site avg... so a nights play might net me something on the order of 10m ISK for 3 mishes (more like 8 really)... sheesh.

After living the hi-life of a C6 Wormholer anything less than 300 to 600m ISK per an evenings playtime is simply just not worth the effort... it's like dropping back to minimum wage after making 100k a year...

The PvE in EvE really is horrible... even Sleepers... Yup, I said it... even Sleepers... with the right comp they are so predictable and rote in their tactics that even C6 sites could be a bore except you have to run them in fleet, with friends which made it tolerable... too much DPS and Ewar to solo even if you can multibox... at least as far as I am concerned.

On a side note, and a personal 'thing'... there has been much said against Ewar in EvE. Everyone knows 'everybody HATES' Ewar... yet, you all do realize Webs and Points, long and short, are Ewar right? And where would PvP be without them now?? but I digress... 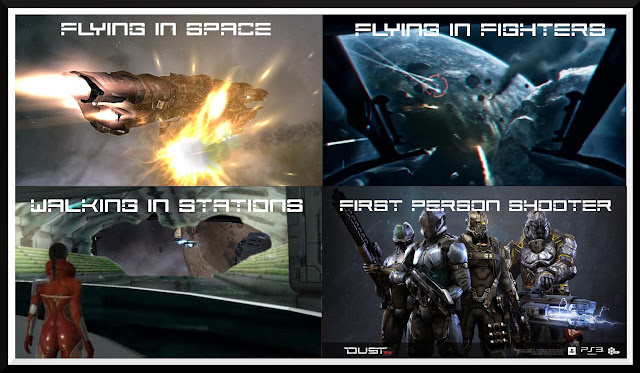 From the indomitable Jester we have a recent post, “Inside your own head” with his take on the current HD iteration of “Valkyrie”, the EvE based Flying In Fighters [FIF] game. Besides being completely sold on the whole concept, hardware and playability Jester opines…  “This game needs context.  I can see Valkryie being fantastic for an hour, maybe two hours.  After that, to become a product, it needs a wrapper.” By this he means, “How does Valkyrie ‘fit’ into EvE?”


My response? Damn that’s easy... (ok not capitol ’E’ easy but...) Valkyrie should, IMHO, be not so much a thunderdome or an arena (ideas which I hate as they have nothing to do with our virtual life in New Eden, Ancient Rome notwithstanding)… IE Valk should not be ‘separate’ from EvE… It should take place IN EVE. CCP should initially tie Valkyrie in where it BELONGS... inna Cap fight...

Some pilots could Opt to fly Fighters instead of Starships... Or swap to a Fighter when it is tactically advantageous… or have an alt fly the Carrier they launch their main from… (OOOooo!) The mechanic for Fighters is there, the mechanic for player controlled starships is there, tie the 2 together... let US Fly the Fighters and Fighter Bombers that are sortied from our Carriers...

Launch would be cuts similar to current docking and undocking... let your fighter run on AP (IE under normal Drone/Fighter RoE [Rules of Engagement]) until you decide to take control. IE you could fly manual ATW or in AP controlled formations, warp-to in formation, approach in formation then “BREAK! BREAK!” ”All Fighters, weapons free…” “Go get some boys!”

Look, as far as I am concerned, EVE should have it ALL... We should have our cake made of FIS, and all the FPS/FIF/WIS frosting we can eat too...  =]

I’m the first to say I know very little of coding, I’m a support and LAN tech by trade not a Bug Hunter… but I can help but wonder with so many of these pieces already in place, is it in the realm of possibility to either combine them (granted not as clean a creating new) or use them as a template for creating new code to allow the Fighter Pilots of New Eden to join in us, The Empyrean Starship Captains and the Immortal Templar Soldiers and make a difference in the wars and struggles in EvE?

Additionally same as the rest of the game, some new missions and exploration sites would be geared towards the capabilities of this level of ship type. Fighter soloable L1s and 2s & exploration sites… First Person EvE…  why not?

This should be a whole new 'skill trained' gameplay option same as frigates, cruiser, etc. The variety of Fighters and Fighter Bombers (and NEW Carrier Sky Wing types!!!) should be its own’ THING’... hulls, mods, weaps, Ewar, etc. Only on a single man FIGHTER scale. They would have or at least start with DPS/Range/Speed/etc./etc similar or the same as today's then Let The Iteration & Rebalancing Begin!!

Plus (unabashed plug for What I Want!)... Valkyrie, a FIF simulation inside EvE just might pave the way for a PROPERLY envisioned & rolled out WIS [Walking in Stations]... and once more make New Eden a new place to play for those whom Starship Captain was never on their Bucket List... but Ace Space Fighter Jock [X-Wing etc.] and Lone Wolf Explorer [Laura Croft inna Halo Spartan Suit] are. Now they could do those things in New Eden too... Do I hear the cash registers ring with new accounts being created that aren’t Alts of Rich Bored Nullseccers?? or mebbe are…  =]

PS It seems CCP may not have as completely folded up on WIS as has been reported... per Mabrick's latest post, "Valkyrie - The How", I quote, "CCP Pokethulhu alluded in his talk at EVE Vegas that CCP would not keep the door in our Captain's Quarters locked forever." ...  Hmmm... this bodes well for a more fully fleshed out and immersive EvE Online.
Posted by Turamarth Elrandir at 10/21/2013 10:25:00 PM 0 comments

I'm logged on and FLYING a SPACESHIP in EVE!!!!

Ok, I'm logged on and flying a metric-fuk-butt-ton of ships from the random stations they were dropped off at by one of my exceedingly helpful mates back when RL ganked my EVE time into oblivion... so if yer anywhere near Amarr tonight you might have caught a glimpse of ol Tur autopiloting back-n-forth inna ship thenna pod thenna ship thenna pod...

Most of SYJ has moved to NPC Null....    big fat ol Meh from yours truly... but it seems we, SYJ, Surely You're Joking Alliance, has KILLED Aniokis, workhole space, negsec... We were the Last Man Standing it seems in the VLWAC (Very Large Wormhole Alliance Club) and now we're the Last Alliance Leaving. Things had gotten real 'quiet' in Aniokis, that I can't nor won't deny... We would roll hole after hole after hole and find.... naught for our troubles. Either no one home, or them as were ran n hid the minute they caught wind of SYJ in da House... so along with the group failscade of a number of big W-space Alliances "we" killed wormholes.

So "we" ran to Nullsec.... oh joy. Needless to say, I dint. This all coincided with my personal life kinda failscading and job changes etc. ad nauseam and so I took an unintentional break from EvE. Not sure I am exactly "back" even now, but I found to my wonder and amazement that I had some FREE TIME this evening and lo and behold I logged on.

So I am gathering together those ships as made it out of the hole... and contemplating Tur's future...

Will it be NPC Null with Mab and the guys in SYJ? Will it be back to the hole which some in my little corp want? Will it be some foray into other as yet unexplored areas of EvE...
Might I go a'cursioning with an Alliance mate?
Seek solace and ISK as a temporary guest of some other (smaller) Aniokis group?
Try my hand once more at solo low class hole diving for fun and profit?
Spend a few weeks having my ass handed to me by Monsieur Javix and his band of ruffians?
Log off again in despair?

Right now I am consolidating ships and getting reacquainted with the stars and sky and where the FUCK is the "open Inventory" button!?!?!? As for the rest...

We shall see said the blind man...
We shall hear said the deaf man...
Mm Mm Mm said the mute...