It's All About the ISK, Cause I Can't Spend the Tears…

I do not label myself a carebear, yet I do not think of myself as a griefer either. The way I play EvE is based on actually making it in the game, because EvE is to me, a virtuality… a virtual REALITY and I want to live and experience it as a alternate reality… I don’t want to cheat by buying wealth (buying and selling PLEX) I want to make my way, and pay my way with the ISK I earn in game.

Now making ISK in EvE is not ‘easy’. EvE is, as we all know, a Reward equals Risk game. In Hisec PvE the risk is low and the ISK is shit, however put together a gang and gank a fat loaded Freighter and Hisec PvP can give you a shot at a real payday… but you have to cover the losses you WILL take and recover the loot before the vultures snag it… risky.


I found my way into Anoikis early in my Evelife, Negative Security space, negsec… the highest risk for the highest rewards (for smaller groups) than even nullsec. The PvE is very risky and I also greatly enjoy being a Mercenary, PvPing for ISK and being a Merc fits my personal Moral Code. In Anoikis I was finally making enough ISK to support getting really involved in PvP and I had found my Modus Operandi, one which allowed me to PvP without qualms… as I like to say, “I’m just doing a job. You did something to cause me to be here, look to yourself for the reasons why.”

So… I am not a carebear at heart, as I first said it a few years ago, I consider myself a Carebadger, an EvE player who wants to make enough ISK fast enough to afford to PvP in something other than cheap T1 frigs and cruisers… I like faction fit T3s, Oracles and HICtors… I like living Anoikis and I like living in a POS (yes, I actually LIKE it… oh I do wish we could dock and shit… mebbe one day) and living inna POS in Anoikis can be a logistical nightmare… and a costly one.

I my time I have tried many forms of PvP, some for the experience, some just for fun and some for the ISK...
-I once joined a WarDec corp (run by a Hisec Noob WarDec'er), I got one fight to a (personal) draw while my 2 corpmates got a WarTarget kill;
-I joined RvB for a while... fun at first, but that's moar mutual masturbation than PvP really;
-I have joined in many late-night-after-the-Op-is-done lowsec roams… some funish, some not so much;
-I fleeted up with Allies once (and only once) to gank a freighter in Lowsec, but, well... simply amazing fail was had that night;
-I have fleeted up to kill-all-the-who-ever-I-am-PAID-to-kill... This I would do again in a heartbeat… for ISK and glory;

Ganking just seemed stoopid to me, even if we had won; War Deccing was boring, and TBH felt dirty; the roams were never really fulfilling, same as RvB… but Merc Ops and cloaky hot drops in Anoikis are the life for me! Merc Ops cause you’re getting paid and Anoikis Hot Drops are simply not the same as Hisec ganks at all… it’s Anoikis, wormhole space, negative sec… If you jump the crazy marble you accept that you are risking it all, and I am one of the reasons you are.

The thing for me is, I hate, morally, the idea of virtually destroying another person's virtual stuff without a reason (IE rationalization) I can live with… one that fits my moral compass.

In a recent post, “The Corruption of Ideals” by Sugar Kyle of “Low Sec Lifestyle”, Sugar opines about Killing-all-the-things in EvE, the morality of PvP in our very weird and unique sandbox. She talks about how morals, values, focus, reason and goals are all lacking in the basic structure of EvE… How the game sets no path or overreaching quest for you, how nothing shapes these but we ourselves. In this post Kaeda Maxwell, the Wild Rose of Molden Heath, commented and the post and comment stirred the electrons in my grey matter…


Kaeda said, "I take viscous (real) delight in griefing (in the knowledge it is only a game and I'm not causing any real damage)." When I hear/read this I always ask myself, where does this delight in ‘not really’ destroying these ‘not real’ things come from? What is the basis? Where is the enjoyment? How is this fulfilling, what makes it "fun"?

This is my moral line-in-the-sand. I have read so much from so many who enjoy griefing, and it all leads me to believe strongly that most, if not all, do it because they enjoy the ‘upset’ this causes other players. They see this upset as childish because to the griefer it is really ‘only’ a game and nothing more... The rationalization they justify their actions against other players by is that as it wasn’t a ‘real’ loss of a ‘real’ thing then the other player is being juvenile for being upset about it and that in turn justifies their playstyle...

I believe, deep down, that if NO ONE ever got upset... griefing would be far less fun than it is for all who play that game. The ‘real’ enjoyment griefers get is over the very ‘real’ upset (“tears”) they cause another ‘real’ person whom they can then justify looking down on because “it’s just a game”… Well, IRL people get murdered over poker, a gods damned card game, and for far less RW dollars than some of the ‘cost of doing business’ in EVE. They say “It’s only a game”, “It’s not real” and “I’m not causing any real damage.”… Really?

SYJ has been paid many times to raid and kill… we got paid billions of ISK (in loot n ships) to take down TLC’s “Office” wormhole… 3 Lrg POSes destroyed, a massive crap load of Capitols, BPO&Cs/mods/ships.etc/etc/etc stolen or destroyed… with an approximate value of 517,000,000,000.00 ISK… and because there is a direct RW USD to ISK ratio thanx to PLEX, that equates to a RW value of $19,460.00 that was ‘not really’ destroyed and ‘not really’ stolen… Yea… it’s only a game… but it can be a damned expensive game to lose at. I wrote up a post about that Merc Op in which I even discuss my moral qualms over the fact that we were paid by a traitor in TLC to do the job…

But it’s the other aspect, the outright disregard for another human beings feelings, that is why ganking and griefing has never sat well with me. Yes they can get just as upset and 'hurt' due to my actions as a Merc, but that is not ‘why’ I do what I do and it is the part I get no enjoyment from at all.

To enjoy that aspect of an open sandbox PvP/E game, you have to have absolutely no empathy at all for the players you target... no empathy for other people. Kaeda said also, “I no longer recall ‘the faces’ of my in game victims, I used to... But they have become faceless ghosts behind keyboards…” I don’t know about you, but I am not a faceless ghost… and the thought that there are so many out there who see anyone they don’t know personally as such does not sit well with me.

No matter how much EvE Online is a game, the players, each and every one, are real people, with real feelings and they are each as different in game as they are in the street, at the office and at home.

Just because someone is different from you, just because they invest more of their ‘feelings’ into the game than you do... to me, this does not justify or provide an acceptable rationalization for enjoying hurting them emotionally just because you 'can'…

EvE is not harsh and hard, EvE is what we the players make it… we are the reason EvE is harsh and hard and dangerous and full of everything-going-pear-shaped risk... and I may even be one of those reasons on occasion, but it aint ever for the tears... for me, it’s all about the ISK.

How Do You EVE?

In response to Kane Rizzel's "How do you EvE?"... and Raziel Walker's response to same...

Others who have shared their setups:
How Evehermit does it...
How Noob does it...

This is just a silly but potentially interesting quickie... I'm still here, just, you know got some RL>EVE n shit goin on... will write an update soon.

The above links show how Raziel and Kane play EvE. Here is how I do it... This is in my Pub (I married a Brit so a 'Bar' is the thing behind me one sets one's pint, or in my case a Cuba Libre, on and leans against whence pontificating... and a 'Pub' is the place where the bar is...)(anyhoo)...

This is my view of EvE... Triple screens; 22" Main on the left, 17" Secondary on the right and the 50" Distraction up center there on the hearth...

My system is a maxed out nothing-special-here HP sittin onna lapdesk as my ass, gravity and multiple Cuba Libre's work together to slowly conform my "spot" to perfection on the new sectional...  ahhh...  =] 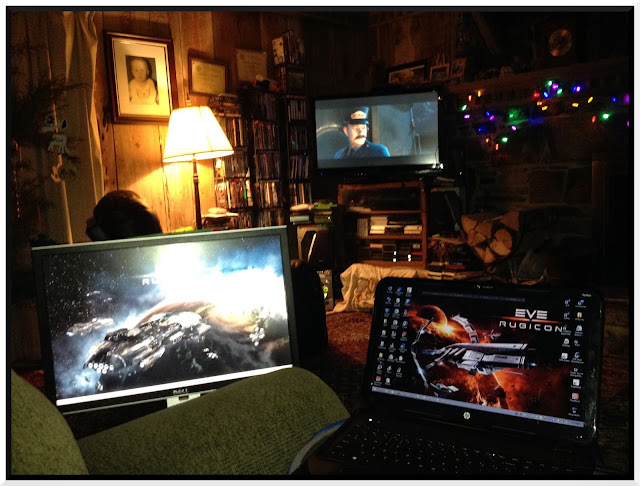