I have been on and playing EVE, sporadically yet randomly… Seems others are still in AFG mode and I find myself getting bored once again. For the last few weeks I have been loggin on pretty much every night, but all I am doing is scanning all the things, which means just those few sites and holes that have popped in the prior 24 hrs, and I have been runnin the gas sites for something to do solo, but overall… meh.

Also last night was the first night I have logged on Elite Dangerous in a couple months. Not that it’s not a good game, it is, but I was focusing on grinding up enough Creds to stop playing just to make creds if you know what I mean, and grinding in any game just to grind is… well, grindy TBH. I was doing the main Rares Circuit and pulling in approx. 1m to 1.5m Cred per round trip per session… but it’s a long 30ish hop/160LYish runs from Zaonce/Lave/Leesti/Diso/Orrere to Witchhaul/Fujin/39 Tauri/Zeessze/George Pantazis then back again… 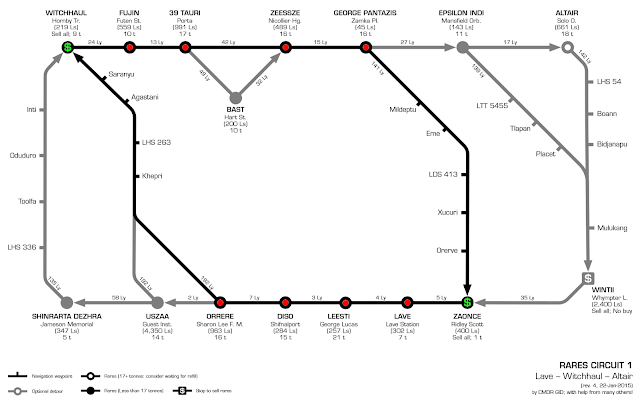 I always take the Economical instead of Fastest routes hence the 30ish hops, there are some upsides and downsides to both. The Fastest routes may cut your hops in half, but they have two major downsides… They push the limits of your fuel use, so for each hop you have to orbit the sun, if it’s the right type of star, and scoop fuel for an unacceptably long time. The other issue is when you land on a sun that is not scoopable… and you have already burned 50% or 80% or more of your fuel on that time saving long ass jump… you can find yourself rightfully screwed if there is not a scoopable star in that system or if there isn't a system with a scoopable star within what jump range you have left.

You have only three options then… see if any friends can be bothered to yer skeevy ass or… whoyagonnacall? Fuel Rats!

…who will save you by coming and transferring fuel to you with Fuel Transferer Drones (OK, Limpets… really? Limpets??) or you can Self-destruct… you know, push buhtan, count to 30, go Boom, lose ship (replaced) and all cargo (not), wake up in station…

or wait until the same thing happens… only slower…

<wheeze> tick, <wheeze> tick… OXYGEN DEPLETED IN: 0:00… Boom (see Fig 1. above above). Though why in Bob's Name your ship assplodes just because you ran out of gas and air, assphyxiated, turned purple and died I know not... itsa mystery. I mean really... who wires up the self destruct to the air supply?

OK, so I choose Economical. You hop, you land, check sun for scoopworthyness, if OK, scoop, run a system scan, finish scooping and warp out to your next system in usually under 30 seconds. Yes, you make a helluva lot more hops, but you get back into warp and are essentially exposed to threats for less time each hop AND you NEVER run out of fuel. It does however make for some looooooong ass boring trips. One nice bonus is I can sell the data collected by all those system scans… I have picked up as much as an extra 50k Cred from that.

So even though I finally broke out of my one game rut, in both the games I play now I am basically bored but that’s not to say that nothing interesting has happened in my gaming life recently… it has, though not in either EVE or Elite Dangerous…

Yea, in the game no has yet played. Oh I know I know there’s the Hangar and Arena Commander… but the game I am waiting on, the one no one has played yet, is the whole game, the persistent ‘verse, the thousands of stars and systems. What they have so far is nice n all, but truthfully in comparison to what we are expecting, it’s just a taste… like a CQ in EVE that has an Open Door… but one that only leads to one station on SISI, not to all of TQ. It’s a good taste, but it’s not the GAME… and I want the game, not an arena.

Anyhoo, I have bought the basic access with the noob ship, the “Aurora MR AC Starter Pkg”… on discount. I logged in and walked around and was highly impressed with the First Person aspects. This game will flat out rock on the Oculus. I like the ships I was able to board, sit in and walk around in. I haven’t undocked though… as I said, waiting to undock into the ‘verse not a single ‘room’ or dungeon… EVE and ED have spoiled me that way.

Now I and you gentle reader are both fully aware this is most probably a form letter, auto-generated and sent based on some algorithm that looks at unaffiliated yet active SC accounts... yet, it was ‘from’ a ColtNickel, I’ll have to see if he is actually a recruiter. It was a lot of the usual “Pilots just wanna have fu-un!” kinda recruiting hype, you know… “Hi there! We’re looking for Casual and Hardcore gamers, young and old, wet-behind-the-ears-noobs and washed-up-cranky-bittervets, crippled, blind or crazy and no more than 30 minutes dead!”

In EVE, at least in our home corp HBHI and in HELPeR, #1 & #2 are the same, and #3 is, “RL>Any Game” and should go without saying. However, some obvious things bear repeating as they are not as obvious as they should be to some so meh.

Anyway… there was this whole links you had to click and things you have read and stuff you have to do when you join and I was all like, but I don’t even know any of these guys. I mean I get that unless you are joining a corp some friends are already in or something then you can’t expect to know anyone… but I’m not clicking and reading and doing until I have talked to a few people at least… geez, what kind of a gurl do you think I am anyway?

So I did the Comms part and logged onto their Mumble server. As the letter said I was in the lobby for only a minute or so and like 6 guys popped up to the lobby and said hi. We chatted for a while and it was very interesting. A few were former EVE players, none active the now but all knew of it. And when they asked what I did in EVE… Wormholes… the response was definitive and immediate… “You need to be in Exploration. Yeah, you’ll do well there.”

One thing that came up was my age. The guys I met were mostly in college or just starting their careers, and ADI’s about page says the members are mostly 20s to 30s. I didn’t catch if any on that night were married, but I didn’t think so. They were pretty interested in getting an older gamer to join up, I thought that was intriguing…

A few things didn’t sit 100% with me… Their corp description says, “ADI believes in training members to a higher level than most orgs." which sounds all L33T n shit until you read,  “Members will be required to obtain a certificate for any and all gameplay roles in Star Citizen.” which smacks of EVE style “Minimum SP Requirements” which I don’t like. They also have a firm anti-piracy rule, which I am mostly fine with… mostly.

Membership Requirements:
* Must have and use Mumble; headset strongly recommended
* Must be mature
* Must not cause drama
* Must be loyal to Atlas Defense Industries and not be a part of any other organization

The Membership Requirements listed above are in principle fine, but in detail, well...

* I don’t agree with requiring players in a game to spend money on equipment.
In this case a headset that in truth is not, like a PC, absolutely required to play the game.
(However as I already has 2 headsets so… meh.)
* Show me a bullet proof acid test for Maturity and we’ll talk about that one.
* Show me a drama free human and I’ll ask you to take the corpse back outside.
* ADI is an ‘Exclusive’ Corp, meaning you aren’t allowed have accounts/alts in other Corps.
Which sounds ok on the face of it, but like EVE, how in hell could you know? You can’t ‘require’ loyalty… people and organizations earn that over time by BEING loyal to their members. Either way I’m not taking any oaths and not crazy about taking ‘tests’ to be allowed to play with others… it’s a game.

With all the above said, I do find it interesting that so many people are so deeply involved in the Star Citizen project. And, TBH, I do hope it all comes to fruition… I really do (I spent $50 bucks dammit). And at first glance and from a brief Mumble convo I liked what I heard and there is no ‘perfect’ corp or guild or gamer group… there are just gamers and I am one of them.

I think mebbe tonight I’ll logon to SC, get on Mumble and try out the Arena… can’t hurt, and who knows… might be fun.  =]