When I decided to play Star Citizen and become an active backer of and blogger about this game, I started with a ton of research.

Primarily I researched the currently available ships in the game. The reason being quite simply I wanted to recreate what I enjoyed most in EVE. By this I mean I wanted a place of my own, a player owned station or ship I could actually "live" in, 24/7/365.

You see in EVE I was a wormholer. And if you know EVE that says something. I have been to EVE Player meets and when asked, “So, what alliance?” my reply, “No Alliance, we're just a small wormhole corp.” caused an amazing real world response once... the guy asking and another player both actually took a small, unconcious step back... and the response to that is always something along the lines of, “Oh... You guys are weird.” ...this from EVE players.  =]

This is because in EVE there are 3 "official" levels of Security, but I say there are really 4... Hisec, Losec, Nullsec and Negative Sec. NegSec is “Wormhole space” AKA, my beloved home by it's proper name, Anoikis.

You see in Anoikis:
(1) There are No gates. You have to scan down random wormholes, warp to and BM, then gird your big boy panties and jump the crazy marble... into a space where there are NO rules and NO rulers.

(2) There is No “local”. If you do not broadcast, you do not show up. THIS is the one that really kills most Empire (Hi, Lo & Null) players. They just can't let go of “perfect local intel”.

(3) We can use every tactic, and many that are unique to our space, AND we can use warp bubbles! There are no gate or station guns and NO NPC police or military.

The NPC's in Anoikis, “The Sleepers”, are the toughest in the game and as I said, there is NO game generated safety in wormhole space, it IS the deadliest space in EVE. Hence in wormhole space the rewards from active and passive PVE have always been the highest in EVE.

So... this is where I lived and died for 9 and a half years in that game. We bought a Large Player Owned Station, anchored it, fueled it, powered up the 30 kilometer wide forcefield bubble and armed it to the freekin' TEETH... then our little corp settled down and lived full time in that Large Minmatar POS, "Serenity Station"

It was OUR HOME. We payed for it, we fed and watered it and kept it strong and healthy and we defended it when we had to. It was our home in space.

So, I want that back, and for now, it's gonna have to be living aboard a ship... and the ship I decided on is the “Cutlass Red”.

It's an Emergency Response and Support Ship. It has one really schweet feature. Between the cargo hold at the rear, and the cockpit forward it has a MedBay with 2 Autodocs. Wherever you are, as long as you have selected an AutoDoc as your “Preferred ICU”, they will be your respawn point if/when you die.

So if one is mindful you can live in this gameworld, I hope permanently, in your ship... even if you die. This would please me infinitely.

OK, time for some screenporn...

(Remind you of any particular Ship?) 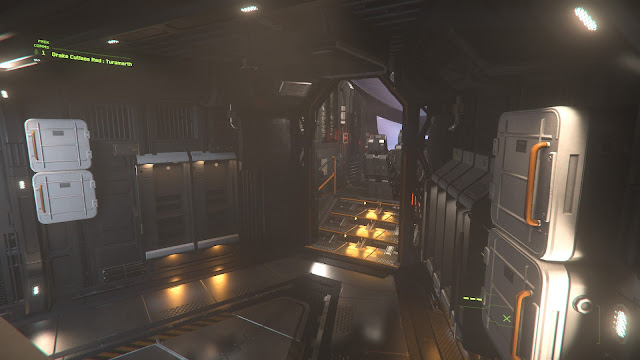 Yes, I feel I can definitely live in my Cutty RED quite comfortably. As a matter of fact, that's where Tur is right now.

You see, I messed up last night and got a CrimeStat. It's only Level 1, so I'm not being hunted by the law and I could try to land somewhere and pay off the fines... but I am flagged as an enemy with a bounty to lawful citizens so I'm fair game for the players, especially when outside of the Watchful Eyes of the Law (IE outside of the Armistice Zone).

It's late, I'm wanted, I'm broke so no paying any fines for me, and I'm tired. So I decided to "go to ground" as outlaws say, hunker down somewhere remote.

I warped out to Daymar and flew down to a random Emergency Shelter then burned hard for the mountains in the distance. I finally saw an interesting canyon system and flew down to take a closer look and YES!!! A small tight box canyon!

So all is good. I simply could not be happier. This reminds me so very much of those early days in EVE with my son's and a few close trusted friends when we moved into the first wormhole we shared with another small corp. That same heady excitement and wonder at the newness of it all, facing the unknown and so ready for this new journey.

But... THIS is what I REALLY want, this is now my goal in Star Citizen.

The Pioneer. A self-contained mobile construction yard, capable of creating planetary modular structures, ushering a new wave of aspiring colonists to customize their new homes on the frontier.

I'm broke, gotta a quarter tank of fuel, half a cigar, it's dark and I'm wearing a spacesuit...