Sleeping With The Stars

One of the things that I felt the strongest about in my years in EVE Online was the feeling of Home. I wrote on this specifically a number of times.

One of the things I loved most in EVE was when we, our small corp headed by my two sons and myself, decided to move and live full time, into Anoikis… wormhole space, or as I call, it… Negative Sec.

You see in EVE, Anoikis is the Wild West, the Outback, the Wildlands, the Deep Desert… on maps, Anoikis is that place where it simply says, “Here be Dragons”.

There are NO NPC Police, NO NPC Navy, NO gates and NO “local”… IE what happens in Anoikis, stays in Anoikis. You can podkill 10 players and immediately jump a wormhole directly into Amarr and the po-po just wave as you fly by…

Also, there are NO NPC stations in Anoikis. I do not count Thera as Anoikis, Thera is it’s own thing (which I never really liked or bought into). So for you to “live” in Anoikis you had to anchor, fuel, arm, support and maintain a POS, a Planetary Orbital Station. I know they are now called Citadels and those are different in some ways, but I’m vastly more familiar with the old, simpler yet similar POS system.

A POS is, well, was a Space Station you anchored in space near a moon, you had to keep it fueled and, well, you lived in it. In EVE of course this means effectively that your ships, modules, etc. were stored there in relative safety.

Once the POS was anchored and the forcefield powered up, and the Warp Interdiction Bubble Wall was anchored, then you could anchor a wide variety of structures inside the forcefield. Ship Maintenance Arrays, Ship Factory Arrays, Refineries, Manufacturing and Research Arrays. And that was where your corpmates & allies could work and live together in “relative” safety.

And that safety was very “relative”… POSes are, of course as are ALL player owned/created things in EVE, not actually “safe”. They had a whole system of passive and active defenses but in the end, if a group wanted your POS dead… it would die. But it wasn’t “easy” and therein lay your security.

NPC stations in Star Citizen are pretty much the same. Your Ships are stored “somewhere” inside the variety of ports and stations and NO ONE can get to them (or any cargo or installed modules etc.) until YOU retrieve one to a Landing Pad or Hangar Bay, at that point are they “at risk”, but not until then.

At this time in the game, ALL of the “things you own”, your weapons, armor, ship modules, etc. are not physicalized into the world while stored. Until retrieved and/or equipped they exist only in your “personal inventory”, not as an object in the verse that can be manipulated… and therefore stolen or destroyed.

So how does all this relate to my gameplay and desire for a Home in the UEE?

So the mechanics of being in First Person, in a physicalized human form all the time, changes how you go about things like logging off. In EVE, you either docked in an NPC or Player Owned Station or you “parked” your ship inside the Forcefield of a POS and, well, just logged off.

One thing I used to do in my early days in Anoikis, was to warp out to a deep bookmark and log off there. I mean your “body” was packed away inside a pressurized goo filled sardine can… you couldn’t “go to bed” if you wanted to… ever.  Meh.

But you may have heard or seen how we in SC “wake up” on login. Meaning on login the first screen you get is a view from your “head” down to your feet as you lie in a bed in the last place you landed or logged in at.

IE you wake up in a bed, schweet! How immersive, how real-lifelike right?. So I’d like very much to “go to bed” when I’m ready to log off, it just makes sense right? But in the stations and cities and Habs and such, we can’t. At least not yet.

So as I understand it, in the future we are supposed to be able to have our own place in the verse. We will be able to rent a Hab unit in New Babbage, or one in Loreville, maybe one day BUY a penthouse in Arcorp! And the one I want most, one day we will be able to buy a piece of land and BUILD our own pioneer settlement!!

But today? Well, we do wake up in a Hab as a standard thing, but once you leave the Hab and that door closes behind you, the door locks. ALL the doors are locked because the rental/purchase mechanics are still to be implemented.

So where does one log off? I mean do you sit your character down on a random bench in the food court and just crap out like a homeless person? I mean you OWN A SPACESHIP FFS!! But we can’t go back to the Hab we woke up in, or ANY Hab…

But we can bed-log (lie down on and log off in a bed) in any ship that has beds! I immediately tried this and you wake up in the same bed in the same ship and at the same place you logged off in. This holds true even out on a landing pad (I have not tried this in a Hangar yet)... Except that so far in my testing when you login on a landing pad you have no more than 1 to 2 minutes until your ship is auto-stored, if that long. And that transports "you" instantly to the ASOP Terminals in whatever port or station you are at, awkward if you sleep in your skivvies...  =]

But... if you log off at some random place in space, when you log back in, you find yourself and your ship exactly where you logged off and NO Scotty the Snotty Traffic Controller to hassle you! The only thing that can mess with you is the inactivity timer, and that's not a bad thing.

I LOVE THIS. I have bought several ships now and ALL have beds and a few have wet heads (toilet/sink/shower combo) and food processing units… IE if it was REAL, you could LIVE in these ships as long as you had food & water.

On a related aside… I am a sailor. I crew on racing and cruising sailing yachts in the southern Chesapeake Bay during the regatta season. I grew up on the bay boating and sailing and it is one of my great lifelong passions. My lady and I are planning and working to buy and move aboard and travel on a 40’ bluewater capable (meaning it can safely cross oceans) sailboat.

So, I am very familiar with living in a small space in a vessel designed to travel far and wide, one that is designed for that very purpose.

And in Star Citizen… I get to do just that.

As I said I own several ships all of which have beds and most of which have at least minimal bathroom and galley facilities. I have tested a theory and found it excellent.

One other thing we do not have in SC (and I do not know if we will) is Bookmarking in Space. IE the ability to create a “bookmark” or an exact X/Y/Z coordinate location anywhere in space that you can warp to as one would a Sun, a world, a moon, an Orbital Marker or a city etc. So we cannot make bookmarks in space… and, as I understand it right now, there is no ability/mechanic for scanning down and finding ships in space… Hmmmm.

So at the end of a long day of mining Quant and getting it safely into the cookers, I put away my Prospector, and retrieve my Herald, I then take an elevator up to the landing pad and walk out, enter the ship and take off...

…I set a warp to a random distant warpable, anything I can warp to will do, but it has to be more than 5 minutes out from where I am, and I then head out. I usually pick a random number (between 1 and 5) and manually drop out of warp after that many minutes of travel, then I pick a warpable as close to right angles from my last Rhumb Line (line of travel), I pick another random number and “Engage”… again dropping out after the requisite number of minutes has passed.

This drops me in a fairly random place in space. I am well off of the main spacelanes… and therefore… I am as safe as if I was not even logged in, as safe as in any NPC Station. I am in my own place, beholden and responsible only to myself for my safety and well-being and here… out here in the deep black, I am at peace. 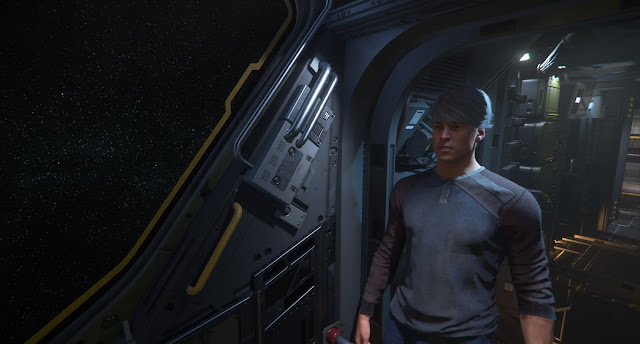