The Calm After the Storm

~or "All quiet in Stanton."
Just an update. All is well, just been busy is all really and, well... I'm comfortable in Stanton. Not a lot of drama lately. Oh there are 30Ks' and client crashes and just the plain ol weirdness one comes to expect when the game itself is out to get you. You get kinda used to it and in the doing you learn a certain perspective, a certain calm regard for your fate in the verse.
We went through the XenoThreat event. It was really quite a thing. I only joined in once, put my DPS on the Idris and watched it explode... simply the BEST Space SciFi SpaceWar immersive simulation I have ever seen, much less experienced directly. I did not get involved in the cargo/logistics aspect... I desired to but I was late getting off my ass and making the effort to get into an instance, my bad, no one's fault but my own.
But I have had a feeling ever since the Event closed that all of Stanton was, sortof, taking a communal deep breath and exhale. We all do hope for more events if they can equal or top this one. But it's been nice, for me at least, to settle down and get back to the peacetime grind... Scanning for Quantanium, mining, hopefully not dying... hauling and refining and then off the the bright lights of the Big Cities to sell our wares.
I have been finally getting into running Combat Contracts. Not doing anything shady (yet), I am civic-mindedly focusing on supporting the Law-n-Order types for the 'nonce. I am also finally getting some practice in with all forms of combat in SC (which is a FAR CRY from combat in EVE). For Fighters, I have acquired a Hawk and a Buccaneer. I am very pleased with both. Still have not used my Cutty Black for Combat, though I do hear from everyone that the Black holds her own in combat.
So far in my time in Stanton, The Quest for Quant is still the best solo creditprinter IMHO. Plus I like it. That is SOOOOOOOOOOOOOOOOO weird to me after 10 years of intense dislike of everything mining related in EVE Online. But I DO like it in SC. I really do.
The mechanics are interesting and consequential and I feel the risk/reward is balanced, well... maybe it's a little safer than it should be when you go out deep in The Belt. But that's more a function of server cap, IE lack of players than any lack of players with the desire to search out, scan down and mess with miners.
I have also been getting involved in Cobra's Twitch streams. Not in a big way, but I'm there and involved and it is...  very interesting, to say the least. But the biggest thing is actually out here in The Real...
I have finally really completed my Gaming Rig.
When I switched over to SC I had to massively upgrade my gear. I got a Dell G7 7700 Gaming Laptop, since then I have added:
R.A.T. 6+ Gaming Mouse
Ipad running GameGlass
Tobii v5 Eye and Head Tracker
And finally I got a HOTAS set (Hands On Throttle And Stick)... and it is a set I had never even heard of before. The Cobra V5 HOTAS by FlashFire. 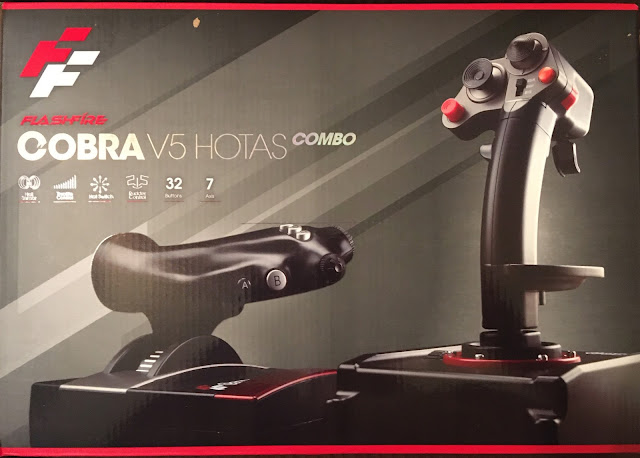 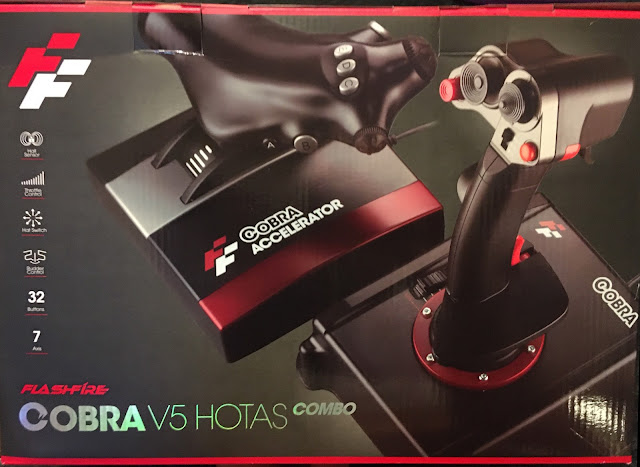 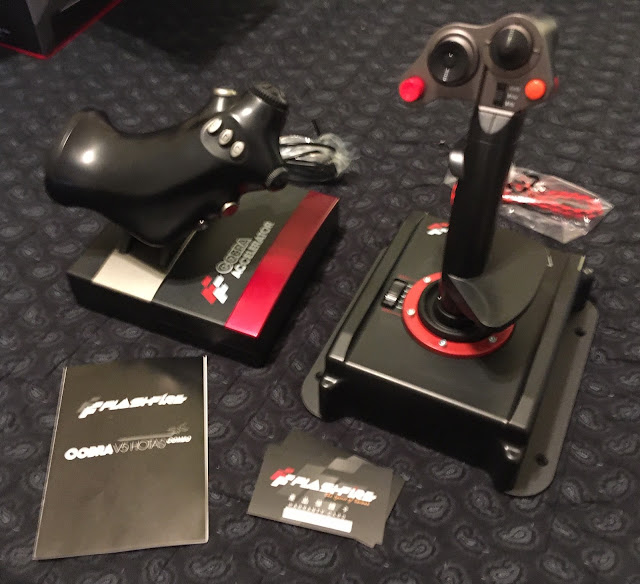 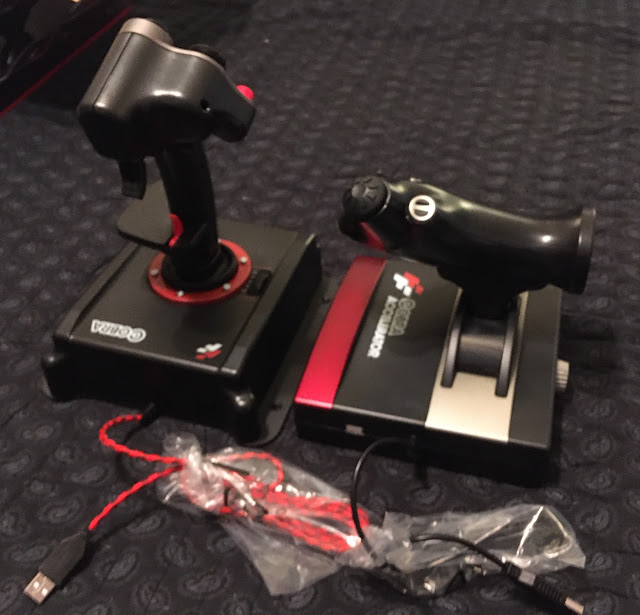 It is a budget HOTAS set, not a Warthog (those who know, know... those who don't... don't) but for a plastic budget priced (~$150 US) gaming HOTAS it is quite good. Just don't treat it like it's made of steel and you will be fine.
I did have one issue and it was a deal breaker... the joystick "Twist", the "rotational-axis" in the stick itself, was not recognized in SC as the "YAW" axis... it wasn't recognized at all. And, well, without "Twist" in the stick, I do not have "YAW" in flight... and that is that, refundme.
However, I am a geek. So I fixed it.
Actually I did as we all do, I Made My Offerings to The Gods and I Sent My Prayers On High and Awaited The Answers... for all of 0.01 ms... ie I googled it... a lot.
So I found the fix is complex, interesting and actually kinda geeky fun. You download 2 small programs. "vJoy" and "UCR". vJoy is a Programmable Virtual Joystick Driver and UCR is a Universal Controller Remapper.
With vJoy you create and configure a Virtual Joystick, or in my case a "Virtual HOTAS" actually, and make it a button for button copy of the Stick (or HOTAS or HOSAS) you have. Then you Map that "vJoy" as a button for button copy of your Stick/Set/etc.
The UCR did recognize the stick's "Twist" (rot-axis) and I was able to map it to a rot-axis the game sees. So the HOTAS send it's inputs to the vJoy... and the vJoy sends it's inputs to the game... and you cannot tell the difference. See: "Stick2_A2_(Twist)_to_YAW" above.
So, I am finding in SC at least, unless you are saving up for that next big shiney ship... and I'm not, I have my little fleet and it does what I want and need, but unless you are grinding and saving... it looks like keeping your wallet balance between 1 and 2 mil aUEC is just about right.
You see at this time in the game, your daily operating, or running costs are... Food & Water for you, Hydro, Quant, Ammo, Missiles and Mining Consumables for the ship and the Occasional and far too common Insurance Claim "Expidite" fees.
On an avg. day I spend something like a low of 2,000 to a high of maybe 10,000 aUEC. With 1 mil in the bank you are actually good for a couple of hundred days of (no-income or ship purchases) game play.
With the ability to net upwards of 1 mil aUEC with as few as 4 "really good" to 6 or so "decent" Quant runs... I lazily hunt Quant out in th' Belt a few nights a week or two... or three. Rinse & repeat until I break 2 mil and then I put the Prospy away, take some time off to run with the Cobros... and lose ships... and lose equipment... and go to prison... sigh.
Those are the over 10,000 aUEC nights...   =\
That said, it is a wonder in this age to me to sit in my ship, knowing I am actually millions of miles deep inside the Aaron Halo Asteroid Belt, aka, The Belt... As cut off from the rest of Stanton's population as one can be. Safe in the deep endless black of interplanetary space.
I split my off-watch hours and sleep cycles between my Mercury Star Runner, SV SERENITATEM (we can name our ships in v3.13!!) and my Drake Herald (not nameable yet)... running silent and on the float deep in Th' Belt... and I am happy.
Will update here as and if things happen worth writing about. Hang in there, I fly with Cobra, stuff ALWAYS happens.
Fly safe my friends
=/|)=
Posted by Turamarth Elrandir at 4/20/2021 01:41:00 AM