If You Can Read My Mind... Why am I Bloggin? 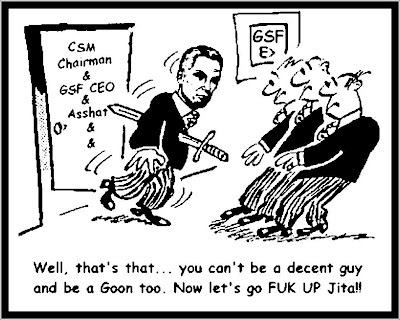 I just spent a day or so collecting my thoughts, making notes and weedin out and narrowing down the links neccessary to make my thoughts clear on the subject of the current TOTM (Topic of the Moment) "Mittens Multiple AssHattery is Real, EVE is a Game" ... just to finally and lastly check in with my friend over at "A Scientists Life In EVE" only to find the post I was working on, was already posted!! just somewhere else,  LOL.

So, to read MY Deepest Personal Thoughts on the topic above, I will save myself the toil of typing it all up (actually I just deleted the word doc I 'almost' had finished) and simply send you here... and add just this.


-1 - Mittens effed up by crossing the OL/RL line.
+1 - Mitten, whether sincerely or not, made public and private apologies.
= 0 - Whether or not he "should" have stepped down was a choice he made and, as he stated, he chose being the GSF CEO over the CSM Chair. In the end it was a political decision to allow him to be a player EVE in the manner to which he is accustomed.
Shows over, move on please...

My real curiosity is not about this flap... but on CCPs involvement with Sony et al. Sony is a Big Old Co. with B.O.C. morals... Just how much nerfing is EVE going to take if Sony gets uppity in the future about our use of 'inapporpriate language' and the 'harsh' hard edge of EVE gameplay? How long before Sony (a major supplier of games to teens and pre-teens) wants to take EVE 'mainstream' and forces CCP to break out the Nerf Titan and rock EVE so that CCP/Sony et al can sell to the 'GP' market that will rake in the ever increasing millions of RL ISK that is the prime reason CCP exists in the first place?

You think CCP dunt listen to us?? Huh, wait till Sony gets a seat at the table... EVE is NOT for 'everyone'... Sony sells to 'everyone'... I see conflict, not PvP, in our future. Gods of EVE please make me wrong.