Planetary ISKflammation, Got a Salve for That?…

or~  I Just Can’t Get That Magnum PI…

Now that we have a by-the-gods, dyed-in-the-wool “EXPERT” Industrialist in HBHI maybe we can get some real ISK outta this hole… And may I add here that I have the greatest respect for, and I cast no aspersions upon my fellow corpmate who has built CAPITOL ships in W-space, amongst many other things… But HBHI has never been a corp whose ‘primary’ focus was Industry. We do have all the basics covered as far as production for ‘needed’ resources, IE Labs, Refining Arrays, Ammo, Drones, Components & all sizes of Ship Docks, etc. Two of our members are well skilled in the required skills for same. So we can ‘do’ most any production project we turn our mind to… but as any who have read this blog at all know, we just aren’t Miners and Industry guys at the core.

We prefer to make our ISK w/ Sleeper L&S. We do make all of our own POS fuels w/ PI products and by hauling in just those ice prods you can’t make in W-space. But we don’t really do any ‘real’ production for sale on the markets in Empire the way Zandramus, Scientist, and Mabrick do. Having Mab join us is a twofold project. He gets to experience life in a wormhole and the possibilities, threats, losses and profits inherent therein… and we get to benefit from his four years of serious Industrial experience and skills.

Take PI for instance… strangely enough I loved all the complexity inherent in fueling a POS the old way… making the various PI products… finding sources for the ice prods… getting them into the hole... stockpiling… the inevitable spreadsheets that went with balancing the different prods in the fuel bay for the load on CPU & Grid… to me, this was wonderfully fun complexity, not boring busywork as it was for many others. Now I never got very deep into PI in the C2, as our sister corp and HBHI Indy guy pretty much took care of that aspect. I worked on keeping things balanced and running inside the POS and kept the defenses up and ready.
Now with the fuel blocks you still have to make many of the original prods from PI and bring in ice prods in order to do your production runs for fuel blocks, but… I don’t know why, but it changed it for me and took out some of the fun. The old way I understood why you had to make or ship in ‘robotics’ and ‘consumer electronics’ on a regular basis because in RL, machinery wears out, shit gets broken and needs to be replaced. There are many ‘consumables’ that factories and buildings require and people use up, the complex needs of a POS made sense to me… but “Big Blue Bloks”? It made the POS not a ‘place’ where people lived and worked, but just this ’thing’ in space that needed gas…  (and I don't know about anyone else but to me... they look like jello shooters...) so meh. 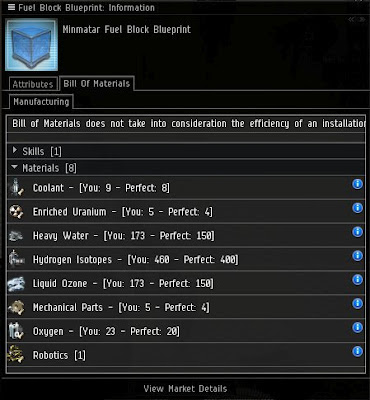 So after the change I for the most part ignored PI until we moved into the C3. Ok I figured I would at least setup several planets making needed fuel comps… only to find I just don’t get it and I was getting very frustrated… especially when I glanced at the wallet one day and found out I was chewing my way through millions as I setup a production line, discovered something new, saw a better way, worked out shorter links, etc., etc., so I was decommissioning and rebuilding extractors, storage facs, spaceports and factories left and right… and I have NO IDEA if/when I might ever recoup those losses… and I don’t even wanna start a PI spreadsheet for fear of what it will show…
I use “EVE Planets” and “EVE PI Planner”, I just wish someone would mash the two together and make a graphic planner so you could import a planetary scan and play around with building placements, links and routes and CPU/Grid requirements BEFORE you (ok “I”) waste a billion ISK effing around with it…  sheesh.

Anyhoo.. I guess part of it is I also have for shit skills… all my PI skills are at L3, so I know I need to up them… one day. I would love a nice steady reliable income stream from PI. I know it can be done, I have talked to Mab and I see the potential… I just don’t know if I have the patience… strange huh, this from a guy who would happily spend hours and hours on the old fueling mechanic?    =] 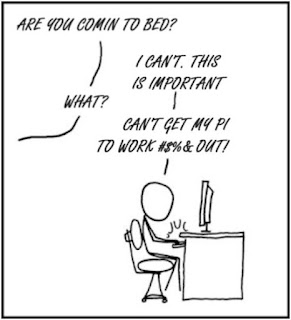