~or, What I Was Doing While EvE Turned Ten.

Sunday, YC 115.5.5… or May 5th 2013 by the calendar of Earth that was… was the 10th year of the Empyrean Age in New Eden which began in The Year 105 of the Yoiul Conference, or YC 105. One Hundred and Five years after the Yulai Convention that established The Consolidated Cooperation and Relations Command, or CONCORD.

In the 10 years that have passed since New Eden has seen a steady growth in Empyreans, their corporations, Alliances and Coalitions.

In YC 111, the Seyllin Disaster, an apocalyptic event seemingly without known cause occurred and random, naturally occurring wormholes begin opening and closing throughout New Eden leading to uncharted and unknown space.

These two events are the genesis of my personal story… the story of Capt. TurAmarth ElRandir, Empyrean. A Minmatar of the Brutor Tribe and a permanent inhabitant of Anoikis, the strange, beautiful, wondrous and deadly space that wormholes lead to…

As a Matarii, family and tradition are at the core of our identity and what we are. I am lucky in that way, I became an Empyrean through the good graces of the gods and in the same way, I am in a corporation run by my family.

As I have written of before in my journals, we in HBHI decided to leave the never ending wars for profit and power that are tearing at the heart of the Empires of known space for the complete freedom, the adventure, and the opportunities for wealth, without Empire interference… in Wormhole Space, more properly called Anoikis as the Sleepers of old and the almost mythical Talocan named it.

“Hiigaran Bounty Hunters Inc.” [HBHI] is a private New Eden corporation in Alliance with “Surely You’re Joking” Alliance [HAHA], an alliance of 17 Empyrean corporations, with over 500 members, soon 2 new corps will be joining us, “Shockwave Innovations [MMD]” and “Gridbugs Research [GBR]” which will grow SYJ to 19 corps with over 700 members. This will make SYJ the single largest Empyrean Alliance in Anoikis.

SYJ Alliance and its member corps live in a Class 6 Anoikis system we have named “Bastion”. As a Mercenary Alliance we earn our bread and butter by hunting down and destroying the Sleepers and savaging and recovering the highly prized technology they hold.. We also take contracts for mercenary work, from evicting unwanted guests, to coming to the aid and defense of those under threat in Anoikis. We concentrate our operation primarily in Anoikis, though we have been known to take contracts and undertake operation in Empire and in the outland of Nullsec.

This past weekend was, personally not quite business as usual though. Strigon Leader, my co-Director in HBHI and our Fleet Commander when HBHI runs Ops as a corp, was able to join with me IRL and we ran joint operations from my private offices together (during which we put paid to a bottle of Ol Goldschlagger, a potent yet smoothy smooth drink...)   =]

We setup and logged in Friday night, got plowed and in the process killed nothing and died to nothing… but we had a great time doing it.

Saturday, logged on in the afterhangoverish… Pell & Owl got a Falcon, Flycatcher and a POD… while the rest of us listened.

Then, finally… Sunday, bloody Sunday was upon us. . .  EvE Online’s Tenth Anniversary.

We all were discussing the gifts from CCP. There were some who didn’t know what was up, some who did. We were browsing the blogs and getting reports in from allies in Empire about the various events both player and CCP sponsored… Marlona Sky’s ‘Flight of a Thousand Rifters’… 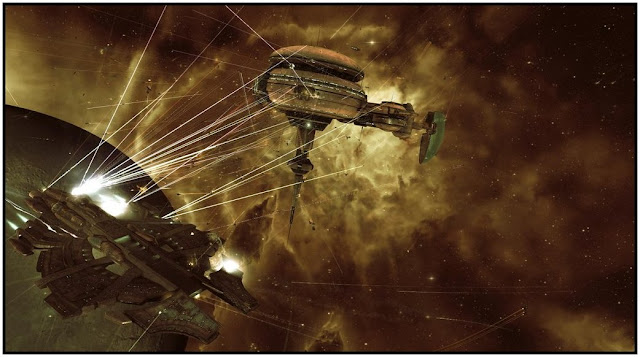 CCP Devs were celebrating and roaming all over EvE getting killed in spectacular ways and dropping AMAZING lewtz!!

We talked about how CCP hoped to set a new PCU (Peak Concurrent Users) record and many of us logged in their other accounts just to have them online… and we did it too… 65,303!!

We rolled the static for a decent pipe and got luckyish, a hisec 12 or so from Dodie. I was happy as our Empire HQ is in a station two jumps over so I ran in and picked up all my gifts and ran home again.

Then things got real fun for Tur. I was in my brand new Sabre with a few allies keeping watch on the statics as we rolled them and… we got lucky! Bradford scouted us a Retriever soloing in a C6/C5… SOLO MINING inna C6 hole!!! Hooo boy!! We got a warpin, I and 3 others dropped in to say hello… I popped up a bubble, and we took down the Retriever and got his POD too… and I got last blow on the barge and solo on the POD!!! This MADE my day! I love flying in fleet and small gangs but getting last blow, it being YOUR killmail is simply the best!

Later that evening after rolling the static TWELVE times we got lucky again. Scouts called out a site gang getting ready to run sites in a C6/C4. The targets warped to the site and we staged at the hole. Finally the FC called for Hero Tackle (me and imsone in Sabres) to warp in to site tag “XYK”… but that landed us 65k below the Targets, with the Sleepers halfway between us and the targets who immediately started aligning…  shit. We both DIAFed trying to burn up into bubble range and we lost getting the Loki and 2 Archons but… SYJ’s 16 man fleet warped in got the Moros and his POD!!!  YEA!

As the night wore on into early Monday morning we kept on rolling the static… and got lucky one last time.  =]

We baited a group of Nulli guys into warping out to try and ninja mass close our static in two Orcas and an Archon. This time I was in my Tackle Loki and we had 25 in fleet. I was on the inside on the hole with imsone in his Sabre, both cloaked. The Orca’s and Archon went into warp, we bubbled up, they landed, got trapped in electronic stickyness as our fleet jumped the hole… all three died and were PODDED…

All in all EXACTLY the best possible way I could have spent EvE Online’s Tenth Birthday!