Adrift in the Calm Before the Storm…

~or “It Feels so Wrong Enjoying Empire space…”

I am still in Hisec… I have not left yet… and I am still enjoying myself immensely… something is terribly truly terribly wrong here.  =\

I have started a BM Folder for Jove Spikes. I BM any and all Jove Observatories I see when I am out-n-about making store runs or some such. I have 3 systems now between Mormoen, Amarr and Dodixie with Jove Spikes in em. You see it is my experience that the Seekers don’t ‘always’ spawn just cause you warp in. I have warped to a Spike and orbited and sat at ‘0’ for 5, 10 minutes and seen nada… zip, no Seekers.

Other times they have spawned as I land, or seconds after I land or as I warp out disgusted that they are not going to spawn… had that happen more-n-once. I have landed only to have them warp out past me. I have been chased by them, ignore by them, killed by them and made some very decent ISK off them… well, off the Seekers at least… I’m quite literally scared to clonedeath of the Drifters.

I also heard/read that if you Entosify (Ento? Entosif? Entosing?) IE target and run an Entosis Link on a Jove Observatory you get bacon. Hrm… OK, so I made a store run to Dodi, bought both E-Link I and II AND (for the very first time in my EVElife) I bought a BPO, an Entosis Link BPO. Keep in mind at the time we are taking 100m ISK for the E-link I and 250m ISK for the E-Link II and 250m ISK for the BPO… sheesh. That took me wallet under a bil for the first time in months.

Anyhoo… now I took a hard look at what to put it on. You see the way these things work is (1) a cycle time of 120 seconds… 2 full minutes… during which you cannot warp. (2) they take fuel, Stront, (Strontium Clathrates to be exact) 1 unit of Stront per cycle. (3) the T1 has a range of 25km and the T2 has a range of 250km… this means you are self-disrupted for 2 minutes within 25km (T1), or up to 250km (T2) depending, of a Jove Observation Tower… you know, the place where Drifter BSes spawn… oh yeah, there.

[Note: this post was started before Fozzie changed the E-Links… and I am too tired to go a dig up the new specs… =P  ]

So? So. So… LOLCeptor FTW. Yup… these things do fit on ‘ceptors and yes that is exactly what I am using. You see if/when the Drifters spawn I want OUT. And as I can’t warp away I will take the next best thing… speed tank as best I can while I hopefully get out of trubble faster than I got into it. This has, so far at least, worked with Seekers.

I landed on the Spike in Mormoen and started orbiting at 24km at near 5k m/s, I had made 2 BMs directly opposite the Spike Beacon where the Sleepers most often spawn, one at 200km and one at 400km. Once orbiting target and start the E-Link on the tower and select the 400km BM… now all I have to do is run n like hell if/when Seekers or Drifters spawn and hope 5000 m/s is fast enough, and my angle to the Sleepers is good enough so I have some transversal and can GTFO safely. So far this has worked twice with Seekers… haven’t had a Drifter spawn on me while Entosing (yes, I have settled on ‘Entosing’ as the verb form…) the tower yet.

So, what I have gotten while Enotsing the tower is one (1) Antikythera Element per cycle… One approx 10 mil ISK piece of bacon every 2 minutes… not too shabby. Plus you also get 1 unit of “Gleaned Information”. This is basically a data unit with some of the Jove Observation logs, these are the 4 I have collected so far… 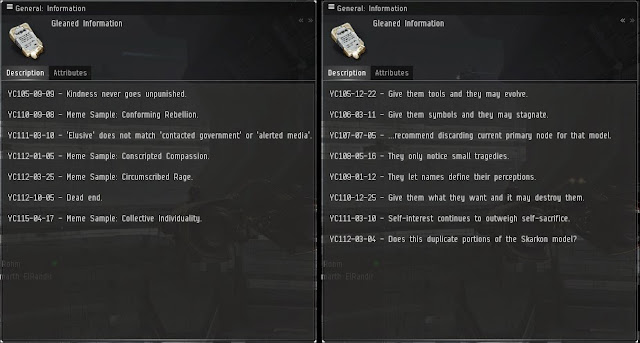 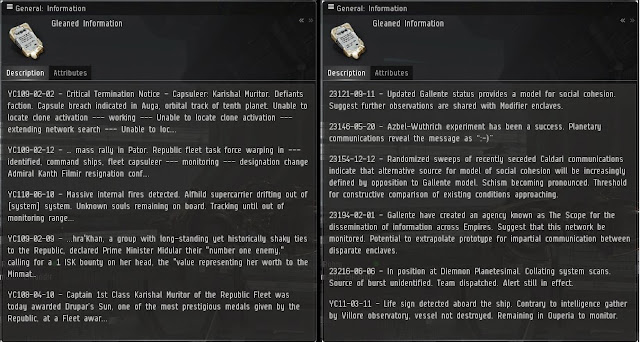 I am curious how all this is going to play out… you see the Drifters ‘seem’ to be disassembling the Jove Towers… I watched a Drifter and a Seeker working on one a few nights ago… and later the same Drifter was joined by another and they both were doing something to the spike. Not shooting or scanning it… but some form of energy ‘beam’ was being ‘fired’ or ‘played’ on the structure. One of my corpmates said he heard/read they were taking them down… hmm.

Now we have the Entosis Link, and it requires 1 unit of Antikythera Element per E-link, T1 or T2, so we will have to have some way to continue to gather these. Right now it is Seekers and ‘tosing (howz that for a quick slide to a slang verb form?) a Jove Spike… yet the Drifters seem to be taking the Spikes down and no one knows what they are going to do next…

Newz Flash!!! A disturbing broadcast from Hilen Tukoss has been released by The Scope… This creates more questions than it answers… Here is my attempt at a transliteration of what was said by Tukoss… 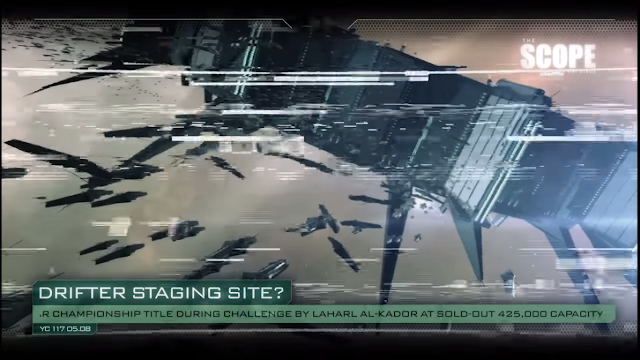 This is Hilen Tukoss aboard the Scout vessel (static), Scout vessel Arek’Jaalan. This is an emergency broadcast. We have succeeded (static) into an unidentified wormhole(??). (static) I can see Hundreds of these (static). We have a (low??) signal but we are (holding it??) as long as we can. Notify (DED??) Notify the DED. We may be facing a possible major (invasion??). More and More ships have been arriving at this enormous structure [Defense Alarm]… Detected at (static)-(en??) it is pos(ible??) that (static) (undecipherable) (static) [Defense Alarm]…

In the video we see a structure I have never seen before, a cloaked Buzzard Cov Ops scout ship assumed to be the Scout vessel “Arek’Jaalan”, an impressive force of Drifter Battleships and Circadian Seekers; the Buzzard gets decloaked and we hear the Defense Alarms go off… all through this Tukoss is attempting to transmit his dire warning. We can, I am afraid, safely assume the Scout vessel “Arek’Jaalan” and its crew were lost. I do not know if Hilen Tukoss was an Empyrean, I do not believe he is… and if he isn’t, then he too is lost to us now.

So… it does seem that interesting times just are around the corner in New Eden my friends… interesting times indeed. For me, I think for now I’ll stay in Empire… I joined EVE back in the heady days of Incursion… I saw one of the first Incursions, and lived to tell the tale… now it looks as though we may have another “incursion” into new Eden from a different enemy with far different goals… and this time, it’s an enemy I have spent my lives fighting already…
I'm here...
I'm ready.