OK, I think I figured out mining in E:D… and I like it much moar than in EVE. Mining in EVE is all but a fully automated process and hence quite boring as anyone who has ever done it knows... even those who LIKE it know it is boring but they use the ‘staring at screen’ time to do other things… read blogs, work on spreadsheets, watch streams, play League… etc., etc.

In E:D however, mining is real PvE, and a quite active PvE to boot. Several things I have learned along the way… Your ships fit is, same as in EVE, critical yet very very different. The modules interactions are more granular, more detailed than in EVE and in many ways more realistic.

So I fly out to a “Resource Extraction” site… IE asteroid field, which in themselves are a bit more realistic too in that they are not silly little partial arcs of rocks with no sensible reason as to why or what they are arcing around… These are fields of rocks of varying sizes usually very (very) close to a sun. And the first time I landed at one I trundled over to a rock and hit mouse1 to run out the mining lasers and… my ship shut down. Powered off. Dead in the water… there I was… adrift in the black...

After a few very interesting minutes I finally got the power back on… turns out I was badly overbudgeted for power. IE out of Cap. There are 2 modules that run your ‘grid’ in E:D, the Power Plant and the Power Distributor. The Power Plants are nuclear fusion reactors and the Power Distributor manages the power output to the ships Systems, Engine, and Weapons. It uses capacitor banks and has a set recharge capacity.

These 2 systems provide all the power to run all the systems on your ship. Ask for more power than your plant and distributor can provide and you blow fuses and melt busbars and…  BZZZZZzzzzzz  zzzzzzzzz  zzzzt!… everything goes offline.

So you have to do like we do in EVE and balance your Power and Distribution (as compared to Capacitor and CPU) as you fit up your ship. You can even run higher capacity mods by offlining some while onlining others and swapping around as needed… but unlike EVE, this is a simple flip of a switch without any need to wait for the grid to recharge to 95% or be at some set distance from X thing or whatever… So there I was overbudget on power by like 120% with all mod on, and deploying all hardpoints promptly tripped all the breakers… oh joy.

Anyhoo… once I got past that (by shutting off ALL defensive and offensive mods) I mined up enough creds to buy a Power Plant and Distributor that easily handles all my power needs… Now I’m running at 90% power draw with 100% mods online, Schweet. So I can head back out and concentrate on actually mining instead of being all focused on not asphyxiating in my ship cause Im’a derp.

Now as to the mining itself… that was interesting, and fun. I have found my best method is to… but first, a few notes of importance…

Mining solo with one laser and one ship I carry 10 drones. I found I can keep each one quite busy with the above method until they die and I have enough drones to make it through to a full 16/16 cargo racks. My only wasted drone up-time is travelling between rocks and as you can’t (as far as I can tell) order an active drone to dock up, and they are cheap, 120c each, I moar than cover the losses. Plus, if you think on it you soon realize you need to free up the cargo racks those drones are taking up for your completed refined ores anyway… so 10 drones at 1,200c against a 30k to 50k cred haul? Yeah, I’m ok with that.

NOTE on Prospector Drones:
I tested Prospector Drones early on. Fire and forget throw away drones, their job it to tell you the exact composition of a given rock… useful stuff to be sure and I can see the value in carrying them, I just don’t have the cargo racks for it yet.

NOTE on Rocks:
As far as I have been able to find out so far (PLEASE correct me if I am wrong here ok?) but there is no way to mark or tag rocks you have already depleted… I guess maybe Prospector Drones might help with that, but the HUD is limited and the rocks don’t POP (despawn) when done so you run a very real potential to get confused and waste time burning on a rock you already depleted… that is a bit of a pisser TBH.

OK, back to the How Tur Mines in E:D…

1. Warp in, land, get your bearings, choose a rock;
2. Approach till it’s clearly defined on your HUD;
3. Open Cargo Scoop;
4. Hit Fire1 to deploy weapons/mining laser/launch & program a Collector Drone;

5. Line up your laser so it’s getting a good hit near the center of the rock… some rotate fairly fast and you want to be burning rock the whole time without having to change your aimpoint;

6. Start burning the rock;
A. Chunks of the rock will be cut free and float off, the Drone will automatically fly out and snatch them up and pop them into your cargo hatch where they are loaded into the Refinery;
B. Keep burning continuously and chunks will be cut off slightly faster than the drone can collect them keeping the drone very busy;

7. Toggle ‘mouse free look’ (button push the mouse wheel) and turn slowly to your right, until the right side control panel just opens up;

8.   Switch to the “Cargo” tab to manage the Refinery and your Cargo hold. (see below)
A. I have upgraded to a 3 hopper Refinery, you will want to buy and fit the highest grade Refinery you can, more hoppers = less wasted ore = moar credits; 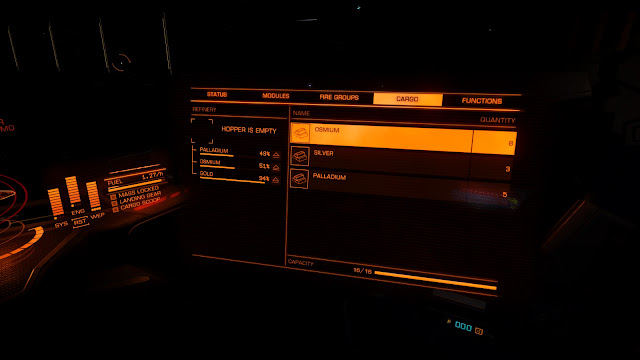 9. Once the drone delivers a chunk the Refinery will tell you what it is composed of and you can select what to refine.  Keep in mind you will be stuck with refining whatever you select until each hopper is filled (1 ton)(or you decide to vent the refined ores… not) once full, the ton of refined ore is automatically moved to the cargo rack freeing up that hopper. This means upon occasion you may/will find yourself throwing away very lucrative ores… so save up and get those upgraded Refineries.

OK, so now you settle in… The laser burns and cuts, chunks of rock break off and drift away, the drone zips back n forth collecting and delivering, you sit and actively hold fire on the laser while deciding and selecting what gets vented and what gets refined and while keeping an eye on the asteroid watching for when the (square white) chunks stop popping off… IE for when that rocks worthwhile ores are depleted.

10. Once the rock is depleted, stop burning and allow the drone to clean up the last of the chunks while picking out your next rock then get over there and get started as soon as possible to maximize the time you have on your drones…

Once your cargo racks are full, head in to a station and sell your ores. Even the way I am doing it solo is better money than the hauler contracts. I tried smuggling once… may give it a go later when I am better situated to cover the loss of cargo, the fines and repair the damages to my ship from hammering off the docking port while under boost while getting scanned… And I have yet to try any PvP or fighting PvE as I am simply not confident of my fight n flight skills… though I seem to be a god in the training simulator.

Anyhoo, to put it all in pitchers…