Doth We Profit, From Their Bloodless Deths…?

(I take a different tack here…  this one wrote itself)

[The scene: A man sits alone in a large luxurious darkened room, the spacious private quarters of a powerful corporate executive, a Capsuleer Starship Captain, in the uppermost levels of a Planetary Orbital Station. The semicircular windowwall of neucleonic reinforced armorglass he faces encompasses a sweeping view which includes many of the assembly and refining arrays for the ships, drones, ammunition & fuels that support this station. In an arc across the sky, outside of the shimmering forcefield that protects them, the Red Giant sun shines through a double row of large warp disruption bubbles covering all primary approaches to this station… he seems intent on what lies, beyond…]

It is late and the somber sky forebodes an ill EVE one might say... I sit, alone in my study. The lights are off and in the gloom the deep grain of the rich Kallewood paneling glows a dark blood red, reflecting the ruddy light of the Red Giant sun that is the lifegiver here, in the wormhole space we call home.
I savor a snifter of 100 year old Ruum, thinking of the future, and of the long distant past. I know they are out there... deep in the hidden places in that eternal night. Sleepers. Drones and spacefaring ships of immense power and strong defensive armor. Inimical to all life. They attack without warning or provocation. Their programming allows for no quarter, no truce, no end to conflict. Warp in, intentionally or unknowingly, to their location and unless you are prepared and ready for a serious fight, you will die… as so many have.
My thoughts churn over all I have learned about The Sleepers since I first ventured into my first wormhole… since I first fought them.
Accepted doctrine is that Sleeper drones and ships are merely programmed machines, AI, Artificial Intelligences at best… but still, just machines. Artificial constructs, “things”… but, in my studies I have recently come across a radical concept. New and… disturbing. Is it possible that they are one of the original races that crawled up out of the ashes after the EVE Gate collapse? No one has ever found a living, or dead, Sleeper 'body' but this new theory proposes that they are most likely cybernetic beings, evolved from Terran, from human, yes, from ‘us’, into the black, deadly and unholy living drones and ships that leave us no choice but to fight. 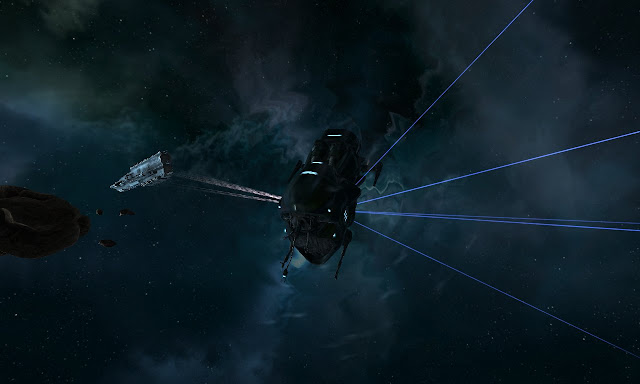 The basis for this new theory is in the incredible technology we harvest, and sell, that is being studied in research centers in all of the Empires and Republics of New Eden and is used in the creation of more powerful starships. In all of this technology, there is a cybernetic or cyberlike basis or component. So far this was thought to simply be an advanced application of what Terrans have long attempted, to meld machine/computer speed and power with the flexibility and creativity inherent in biological/chemical systems… the prime example, the human brain which created the computer. What if they could be joined?
But what if the race that became the Sleepers had taken this to the end product, the final realization… A melding of artifact and life? What if they had become cybernetic living beings? Living machines… How would we recognize them as a lifeform? What changes in them would this ensue? Would they still be, ‘human’ or even ‘alive’ as we define it? Since I have learned of this theory I cannot help but wonder if we are fighting, and killing, living beings of metal and electricity… or are they just the automated lifeless drones we have for so long believed them to be? 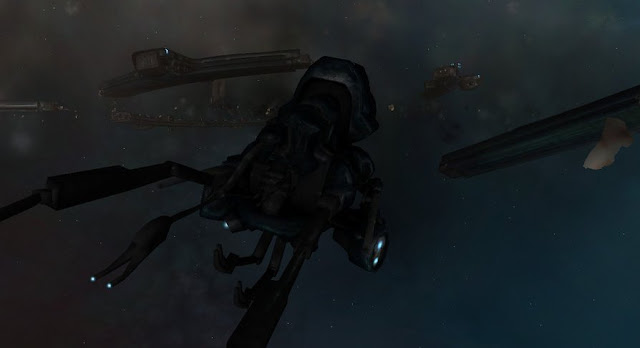 Sleeper salvaging is one of the most lucrative trades in New Eden. But… as long as we were simply destroying drones… machines, the left over relics of some long forgotten wormhole war… I was at peace as we were ridding ourselves of a blasphemy, machines programmed to kill living beings. Morally we had the high ground. But… if we are ’killing’ living entities and profiting thereby… that puts our life here in a whole different light. One I am not as comfortable with.
I remember how it was before we came here... I had my fill of the faction bickering, political backstabbing, vandettas and feuds that no one could even remember the cause of… and worst of all, the sheer greed that was the driving force behind the piracy and so much of the conflict that freely spends the lives of so many as fuel to fill the coffers of corporations and alliances in the empires of New Eden… I had become sick of it, and sick of myself for being a part of it.
Therefore I left Empire Space and the endless, senseless killing. Oh yes, I was assured of my personal survival… I am a Capsuleer Starship Captain, and therefore, immortal. But my crew… and the crews of other Captains are not… and even with excellent lifesaving equipment, with the best ISK can buy in escape pods…. many are lost… many die in the fire and ice of combat in the black, so many… too many…  I swore to my crews I would not risk their lives for the greed of others… that we would find a life where we could be proud to do our duty and unashamed of our service.
And so, we came here… to a Class 2 wormhole where we would fight the Sleeper Drones and harvest the lucrative loot and salvage without committing murder. We came out here to stop Killing for a Living and do what we were trained for, what we do best, and yes, what we love… so we can all afford a better, safer life…
Yes, it is dangerous and deadly work… and yes, we have killed here, and some of us have died in that defense. We have had to fight to protect our home from those who would scan down the random entrances to this W-space… But it is the Good Fight. We are defending our home and loved ones… not killing for profit or much worse, for the profit of others.
It has been a good life here. We have built a Station and a life worthy of living and enjoying… and now I find myself disturbed and ill at ease at the thought that we are still killing for profit. Killing in the name of Greed...
And I... I am going back out there, into that deadly sky... I, my ship and my crew, to find, and to fight them once again. No longer sure of my purpose and whether I am doing ‘good’ or not… I sip the warm aromatic Ruum and stare into the black…  Yes, we will go back out. Yes we will destroy, or kill, the Sleepers… This is what I do. This is what we do. It is all we have… 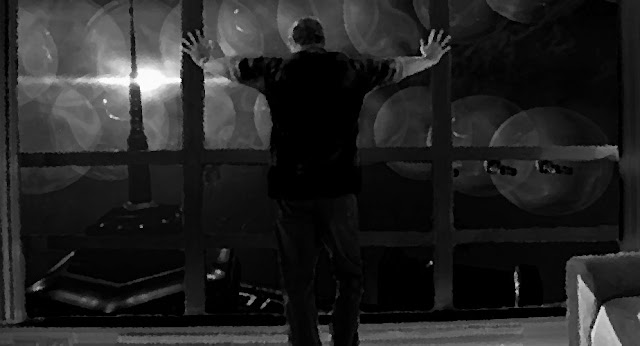