Just wanted to jot off a note here to the masses of my readership... (yo dude)

Several of my recent posts tell a few tales of, well, no proud moments to be sure... however...

It seems to me women have an insight men often miss. I have, as you may have followed, recently lost a Hoarder to stoopidity and a Drake to a wormhole raid (the which of included a podding [with a full set of 'plants AND 'wires... sheesh] as is normal in W-space)... sigh. One might imagine this could lead to a wee bit 'O depression and yes, I will say it... some tears.
But the lady folk have a way of dealin with such feelins that, for the most part, the male of the species finds perplexin and even a might irritatin. You see, when a (not all, but many) woman gets depressed... she oft goes shoppin, and very often for... of all things, shoes.  Huh...
Well I am here to tell ya they just my be onto sumthin here... you see after I lost the Whoredur... I went and bought me a Jag..  =] 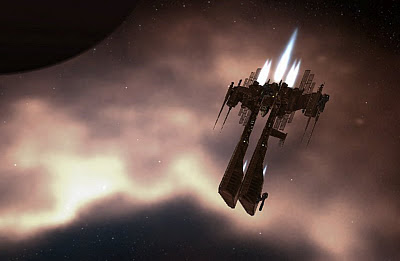 Man OH Man...  Nuthin felt better and picked me up moar than undockin in my bran new Jag. I flew it back to the hole and spent moar than a few hours just sittin an lookin at it in the Hangar bay, sittin in the cockpit, luxuriatin in that 'new cockpit' smell...  Ahhhhhhhhhhh....   =]
Shortly after that came the WH Raid that put paid to the SleeperSpecial, my WH Duck [and POD] and THAT put me back in Autaris, spittin up clone goo and goin thru the whole bodyloss experience all over again.

I HATE gettin use to a new body.... even if it is cloned from my very own DNA, still always "feels" weird... like... like walkin around and every step you take has that "5th step up a 4 step staircase" feel to it. You know, when you go for a step what aint there... and for just a split second your world is all "wrong" feelin...  sigh. But, it does go away after a while.
Anyhoo... I woke in Autaris and felt even worse than I did after the Whore loss a few days afore... so...  I bought me a bran new Wolf!!! LOL 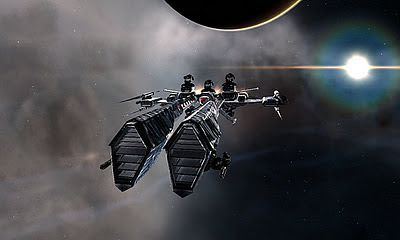 and once again, "Nuthin felt better and picked me up moar than undockin in my deadly new Wolf."

Now two things to unnerstan... I have wanted a Jag and/or a Wolf for months now, I was just holding myself firm to the training schedule I had setup, which was to hammer down a number of L5 skills I have been puttin off due to the time investment... keep in mind also some of them unlocked Assault Frigs, which the Jag and Wolf are. Now Jag is, well it's a JAG man!! Sleek, dark, FAST and a graceful, hard hittin beauty, As for the Wolf... well, the Wolf is a no holds barred barroom brawler... and looks it.
I spent several hours on my way from Jita to Dodi stoppin off in likly 0.5 systems and doin a little rattin, just for fun and to 'safely' try out her legs and fists. Needless to say she makes vurra short work of every Rat I came across. I was hard put to keep up with target changes...  LOL  Was FUN!!! and JUST what I needed after the week I have had.
Now I am sure there are them out there as what feel killin NPCs is NOT what you 'need' after losin at PvP, you need to GO AND KILL SUMONE!!!!... but you needa 'member in both cases I was in a Pv"E" fitted ship. I was not seekin and actually was hopin to avoid, PvP in both cases. I accept that I got killed.... I mean, it's EVE fer Krist's sake.You know what they say...
"When sumthin bad happens to you in EVE, always 'member to bow deep and say... 'Thank you CCP! May I have another?'"  =]
We PAY real money for this... if it makes ya cry 'real' tears, cancel the card man.
Fly Safe and see you in the Sky  =/|)=
Posted by Turamarth Elrandir at 11/19/2011 06:21:00 AM