Fresh from publishing the community spotlight on the EVE blogosphere and Blog Banters, CCP Phantom has suggested a banter focus on competitive tournaments.

There is no finer spectacle in the universe of EVE Online than the explosive dance of weapon-laden spaceships in combat. The yearly Alliance Tournament is the jewel in EVE Online's eSports crown and the upcoming New Eden Open should deliver the same gladiatorial entertainment showcase.

“Given the scope of the sandbox, what part should eSports play in EVE Online and what other formats could provide internet spaceship entertainment for spectators and participants alike?”

Ok first off I am not a sporto… Dun’t for the most part like modern professional sports A-tall… gripes my ass some bozos can run/kick/headbutt/dribble/throw/toss or hit with a STICK some kinda BALL and make millions… while cops and teachers and firefighters can barely make ends meet.

Just seems bassackwards as shit to me that our “Hero’s” and our kids “Role Models” are, for the most part, greedy useless entertainers… everyone of em damn near as bad as… as… ‘actors’… who make more and actually do far, far less ‘for’ society… (irregardless of what they do or give to charity...) and almost as bad as the lousy ‘actors’ in the WWE… so for me personally, ‘eSports = meh’.

There… ok, got that outta my system.

This year’s Alliance Tournament ‘X‘ was actually the very first AT I followed at all since I have been in EVE. And then really only cause Ripard Teg (IE Rote Kapelle) and RvB were in it. It was exciting and fun to watch and I did get caught up in it a bit… but these guys are not ‘pros’ making millions of whatever you call your local ‘real’ currency.

I have the greatest respect and admiration for anyone and everyone who even dreams or aspires to the Olympics… I watch both Summer and Winter games with utter fascination… My dottir just started Gymnastics and I am amazed at the abilities, concentration, skill and spirit of all of the people at her gym.

THAT is skill and sweat and blood and talent and patience and dedication and sportsmanship.

So where does that leave us? What real sweat and blood and talent and patience and dedication and sportsmanship can you find in a bunch of (mostly young adult) guys mouse, keyboard and computer game skills? How do you test for drugs in a virtual reality game that actually has them? I know as well as you do that that should be easy… the Server Knows All… therefore the Devs Know All too right? Can you really ‘cheat’ in a server environment? meh...

That is one thing that crossed my mind when I was trying to figure out what the hell I was gonna write for this BB… (I really like taking part in them but I actually almost skipped this one, well… I said it above. Change the ‘reward to equal the risk’, IE footballers (any kind)/basketballers/golfers/etc., make the same as a basic middle income (based on your local state/country/etc.) and policemen/teachers/firemen/ etc., make ridiculous millions per year and I will give some respect.)(…evidently there was some left in my system…)  =]

Anyhoo…
AT’X’ was my first exposure to eSports. One of the things that got me about it was how short it was. Each match was over in minutes. I can’t off hand (remember I’m not a sporto) think of any ‘sport’ that has matches that are as brief. I enjoyed it all, but I wanted it to last longer… all of the commentary lasted far, far longer than any of the actual engagements… bla bla bla. The Providence Gank I watched last week felt like it lasted longer...  =\

I have though occasionally thought how much fun it would be to have variety of races in New Eden… something that evidently used to occur (see Rix’s Sandlot Games)… for instance, a 10 or 20 hop loop through hisec, with multiple markers that need to be flown past (inside a specific range to mark time) before you warp to the next gate. Some in system markers would be on the same grid and you would have to fly through them manually (a frig/cruiser/BC Micro Jump Drive or MJD would be the bomb for this kind of sport) and some markers would be multiple in system warp-to’s with a high degree of realignment between warps and then off to the next gate and so on… very, very fast ships with maxed out speed/alignment mods and matching skills would be key.

Or mebbe a Great Race Around New Eden Endurance Team Event with a ‘pass the baton’ mechanic to allow teams to work across TZs (and players OL availability). Something in the tradition of The 1908 New York to Paris Race… with a bit of that other Great Race thrown in for good effect and the lulz…

One variation would be to allow the listed entrants corp members (same as the ATs, a balance of team #s/ships/fits) to be actively involved with just one ‘flagged’ as the active racer (ball/baton carrier) and the rest working as support/interdiction forces… possibly limit fittings to just webs, scrams & mebbe jammers; IE 'tackle'… the active racer could ‘pass-the-baton’ making another corp member the active racer… the possibilities are intriguing. Sort of a Football In Space (US or Euro rules, or mebbe both?) scenario but played across multiple ‘pitches’ as the active racers jump gates…

Would/should CCP allow ganking and griefing during CONCORD sanctioned races (IE CCP sanctioned eSports races)? They take care of this in the AT’s by having them in Jove space… so I would ‘ass-u-me’ that in order to have a gank/grief free event in Empire space, CONCORD would be have to be set to ‘DOKKEN anyone who even begins a targeting cycle on an official race participant.

Well… that’s as far as my imagination goes as regards eSports in EVE… I like races in general, and while not a sports fanatic (and yes ‘fanatic’ is the root of the word ‘fan’) I do often watch the TT… so races in New Eden would be of interest to me. 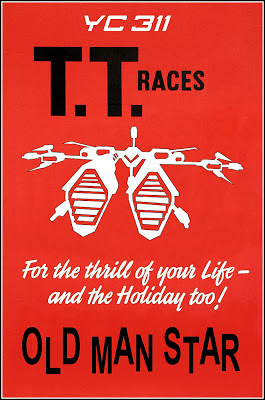