The Tapestry of Tur’s Travels…

or~ Travelling Without Moving… 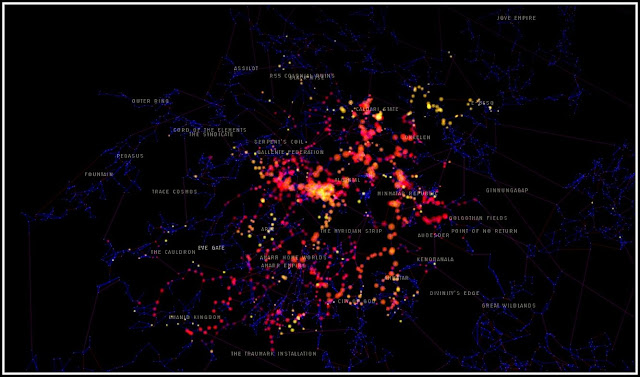 In Mabrick’s recent post, “Getting Around a Bit More than Before” in which he posted a pic of his “visited systems’ and asked if others would do the same in response.

Mab has been ingame 4 years… his map show an almost exclusive large red blob in primarily Gallente space with a smattering of orange tendrils just starting to grow as he experiences W-space life in our C3. We have a static lowsec hole so he is now unavoidably spending time at the least transversing lowsec in order to access Empire for store runs and such. So his very limited red blob in Caldari space has grown yellow & orange tendrils of is new travels in and thru lowsec… it is an interesting map, especially in comparison to mine.

As you can see above mine is a bit more all over the place. I have been ingame only 2 years to Mab's 4 but… approx a year and a half of that time has been spent in W-space.

First, understand none of our travels in W-space show on the Visited Systems Map… I have spent quite a bit of time, as Tiger Ears does most of the time, travelling from hole to hole through the local W-space constellations… none of which shows on the map.

Second, one of the very interesting aspects of W-space life is what I call, “Travelling Without Moving”. Life in a wormhole includes a very interesting element… You see wormholes are the ‘gates’ leading into and out of W-space… only they are natural phenomena not manmade artifacts… (Hmmm, one must wonder at the term ‘natural phenomena’ in a virtual reality game… worrisome huh?) and they have a limited lifespan and despawn and respawn naturally or they can be manually despawned by mass closing, IE breaking the mass limit of the hole forcing it to close.

As we have a static lowsec hole to Empire, when one despawns, another respawns immediately but in a random location somewhere in lowsec Empire space… Plus we can have up to 4 K162s, or random holes, spawn at any given time… they usually lead to other wormholes but can occasionally, lead to any sec of Empire… this mean that every day when you scan down the daily holes you never know where you are going to pop out.

I have seen parts of New Eden I would probably never have ever intentionally gone to… and many systems I would have not had the ability to visit, IE null system deep in Sov held space… lowsec systems that neither business nor pleasure trips would have led me to… other W-space systems that we can raid… (those don’t show on the map of course…).

One of the more interesting things about Travelling w/o Moving are the times when we pop out in a lowsec or a null island... look at Black Rise, Syndicate the Cauldron regions and you will see single instances of visits w/o the connecting line of jmps in or out... this is ONLY something you will see on a wormholers map...

The farthest out I have ever been is here in the Outer Passage region...

This is “Travelling Without Moving”, every day our system is connected to a new set of random systems throughout New Eden and W-space… we get to travel and see New Eden the Wormhole Way!