Ripard Teg over at Jester's Trek wrote a post called “Don't Do Anything Stupid” and offered it as the basis of a Blog Banter as he is curious what others feel on the subject. Personally, I'm restarting manufacturing that I haven't done in years and finding myself having forgotten almost as much as I knew the first time around.

So this month's Blog Banter will gravitate around knowledge, specifically EVE knowledge. Some examples of topics to cover:

-Is EVE too complex for one person to know everything?

-Is it, in fact, too complex for one person to know everything about one topic?
-How do you maintain any knowledge or skills related to EVE over time with breaks and expansions?
-Does CCP do a sufficient job documenting the features of the game, and if not, what could they do better?
-How does one determine where the gaps in their knowledge even are?

No… and yes. As in most things the answer is somewhere in the grey chewy center. And once again we are faced with a banter that is HIGHLY subjective. This is not an Are Missiles Better Than Guns topic… You can compare missiles to guns and bring out reams of hard data for specific ships, fits and situations. You can argue heatedly with FACTS at your disposal… not so with the far more nebulous “Is EVE ‘too’ complex?” Complex for whom? Complex based on what criteria? Says who? You? Oh yea?? You and who’s ARMY ya troll!?! Getbackinyerdaddysbasementyayutz!

Asking if EvE is “too” complex is like seeking the answer to one of modem life’s greatest riddles… “Who would win… Superman or Mighty Mouse?”  =P  In other words, EvE is a conundrum, written as a riddle, wrapped in an enigma and available as a boxed set for only 2 PLEX!!


OK, ok… Is EVE too complex? Nope, not to me. As a matter of fact, I’m worried it has been getting a bit watered down lately… 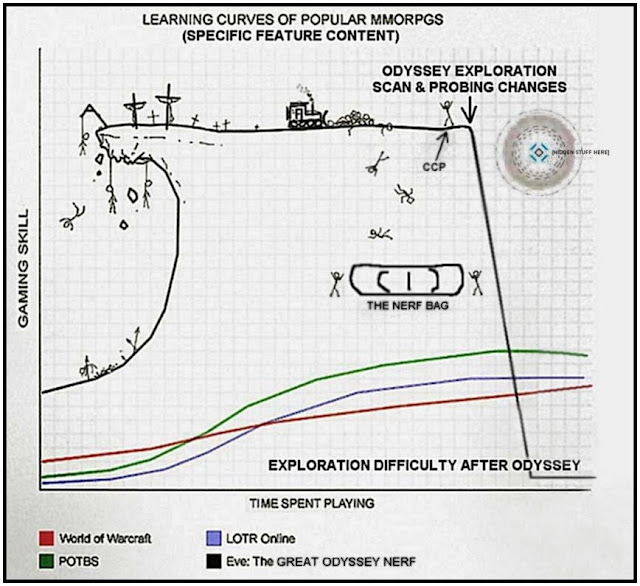 Since Odyssey dropped I have been propagandizing and proselytizing against the Great Scanning Nerf of 115… changes to the mechanics of Probes Scanning and the addition of the Discovery Scanner that IMHO, have badly and most importantly unnecessarily nerfed scanning in general and basically ruined Exploration specifically.
See:
“To Boldly Go... to the Back ofthe Queue for the Next Site...” and
“Keep the unknown unknown: disablethe discovery scanner in w-space.”

Then there are those such as Jester who debate “Useless Complexity” vs “Useful Complexity”, again a totally subjective determination. Take for instance this hypothetical case…

A 5 year Carebear Industrial toon. Mined, refined and researched… bought and sold ores, minerals and mods and produced and sold hundreds of Dominixes over 5 years… But never even once sat in one, fitted one, ran a mission or ratted in a belt.

A 5 year PvPbear Pirate toon. Practiced flying and PvP and skilled into ALL T2 fit T2 frigs, crusiers and BCs, etc. Learned fits and tricks and ganks and traps… he flies solo, gang and fleet PvP in Hi, lo, null and negsec. Thousands of kills, under 100 losses and most of them in the early years… now rarely loses as long as he can control the engagement.

The carebear whines and moans about the carpal inducing clickfest of research and PI… “Too gods damned complex!” he cries. I want my bacon and I want it NOW!

The PvPbear whines and moans that scanning down ships to grief is WAYYY too complex and time consuming… it need to be EASIER so “I don’t have to waste so much time that my targets have a chance to get away!” he cries. I want my bacon and I want it NOW!

According to all the reputable sources I can find, if a single player wanted to skill a toon to L5 in EVERY skillbook available in EvE today, it would take over 28 years… Twenty Eight Real Years…

Tur has been constantly skilling for 2.5 years now (40+mSP) so I have (assuming NO changes to skills, yea right) 25.5 years to go so that’s what… 2038, I’ll be well into my 77th year by then, drooling all over the senso-pad, still playing EvE… probably mining in some newfangled damned Jovian/Ore hybrid with them there Hyper-whatchmacallit modules that let ya mine up a whole AB… cloaked and off grid… But keep spamming the Ominsweep damn yer eyes! ‘cause they got them ‘pinger probes’ now that let them effin Griefers find ya… sonny!

So, (1) Is EVE too complex for one person to know everything?
Of course it is… as it should be, EvE is not ‘just‘ a game… EvE is virtuality. A real virtual life… and life is full of unnecessary, tedious and frustrating complexity… gives ya something to do and a reason to raise your fist to the sky and curse the gods! Or conversely to sit at the computer and type up a sharply worded email to those idiots at CCP… six of one half dozen of the other.

(2) Is it, in fact, too complex for one person to know everything about one topic?
Probably not… given time and an unchanging ‘verse… but CCP aint that dumb, they keep messing with us and throwing us curves and stirring the pot… Keeping this crazy ‘verse we live and die in ever new and frustrating… and I love ‘em for it.

(3) How do you maintain any knowledge or skills related to EVE over time with breaks and expansions?
Again, simple… You don’t... the ONLY constant in any world is change. Wait long enough and ALL of this will transform, morph, evolve, devolve, be wiped out by asteroids, DIAF and be reborn anew and one day… one fine day, the Sun, our lifegiver, will bloat red and huge in the sky and eat her inner children. CCP somehow knows this and they are making sure that our private virtual verse follows the same natural rules… and I love ‘em for it.

(4) Does CCP do a sufficient job documenting the features of the game, and if not, what could they do better?
Nope… documentation as regards the mechanics in EvE sucks just as bad as using the [enter religious text (book/scroll/whatever) of your choice here] to explain physics… again, a reflection of the real world in a virtual verse… It is up to us to watch the apple fall and ‘discover’ why… again, IMHO, just as it should be.

(5) How does one determine where the gaps in their knowledge even are?
Not to get iterative but… You can’t as you are going to spend all of your time playing catch up and seek-the-truth and experimenting and trying shit out… At best you will stumble on them as we all do… when told by your FC to use this fit “[open link to Fleet Doctrine *ship*]” and your response is, “Can someone tell me what all the Red ‘X’es are about?” IE Get out there, stumble around and learn.

"Blog Banters" are brought to you by the good folks at the...
"Inner Sanctum of the Ninveah" by Kirith Kodachi