The State of The Blogdom... 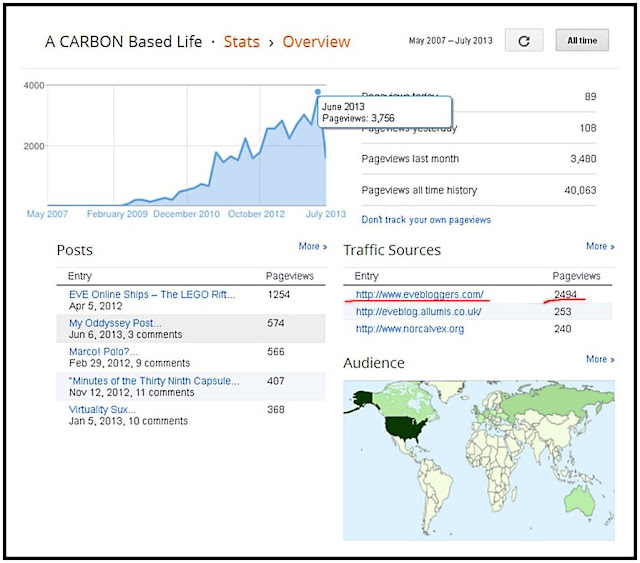 Is blogging, specifically, EvE Blogging, Alive and well? Sick abed? Dying? Dead? Many have weighed in on this Banter in The Wild as twere…

Ripard Teg of Jester’s Trek with ‘Ancillary conversation booster’;
Marc Scarus if Malefactor and his somewhat negative ‘Bloggin Lives On’;
Alexia Morgan of ‘Touring New Eden’ and his somewhat ranty ‘A new Eve bloggers community site is coming’ just to name a few…

Both Ripard and Marc reference The Ancient Gaming Noob and his ‘Gold is Where You Find It – Blogging and Community’ post… there are many more as are thrashing this topic back-n-forth, for background though you can’t beat what TAGN has posted, very worth a read.

Most of you by now know the genesis of this, Marc Scarus’s post on possibly pulling the plug on the relics, ’Evebloggers.com’ and the ‘EvE Blog Pack’. This took place at the un-coincidentally same time as Seismic Stan over at Freebooted was asking for someone to step up and take over the ‘Blog Banters’, both were due to RL>EVE changes and needs.

The upshot of all this is the following:
(1) Kirith Kodachi of ‘Inner Sanctum of the Ninveah’ is the new Custodian of the Blog Banters.
(2) Cyberin of Cyberin EvE is the new Custodian of ‘EVEBloggers.com’ and the ‘EVE Blog Pack’.
(3) Alexia Morgan (above) has started a new ‘community’ initiative in the form of the EVEBlogs.net
Additionally Foo over at "Foo's EvE Musings" has started a Blog list here, "Foo's EvE Blog Roll".

One of the biggest drama points has been Alexia Morgan’s references to Independent blogs/bloggers such as:

“…independent bloggers are ‘mostly’ clueless about their site security and administration.” and
“…the ‘change of focus’ is to, put it bluntly, tell them to go screw themselves.”

These are just a few examples culled from this ‘Interview with Alexia Morgan of The EVE Online Blogging Community’ over on ‘Warp Drive Active’ by Winterblink.

I must say while I was not happy with the somewhat negative way Marc Scarus approached the possible shutdown of ‘EvEBloggers.com’ and the ‘EVE Blog Pack’, he (nor anyone else I can think of) has never taken such a strongly negative stand towards EVEs bloggers, in’e’pen’nent or not.

I now state for the record, I was offended and still am. Alexia can take his community site, print it out on card stock, fold it all up into nice sharp corners and shove it... ‘nough said.

However, with that out of the way… if you worked your way though the above links, kudos to you… lots of info and even more drama… but, this is all background to what come next. I wanted to touch on a few questions all of the above raised over on TAGN’s site… to whit:

1-Where do you think blogs in general, and MMO gaming blogs in particular, are headed these days?  Has progress passed them by?  Are they relics of a bygone age? Or have they just gone from being the latest “new” thing to being just part of the norm and have settled down?

(1) No I do not feel they are relics or fads. Blogs are still a new thing in the world and I think they are, as all new things in human culture do, still finding their place and adapting to changes.

As for the future, personally I feel blogs will adapt and continue to add to the human dialog and discourse. They are to me, a middle ground in publishing and literature. A place for independent voices to take a longer deeper look at topics without going so far as to call it a thesis, but farther and deeper than a quick note, a gut response or a single thought.

The world changed when the first printing press was created, allowing smaller groups the ability to truly ‘publish’ knowledge, idea’s, news, opinions, gossip and yes, propaganda widely to the masses. It kick started the idea of general literacy, something long held for just the aristocracy, scribes and the clergy, the ‘learned’ men of the day.

Then came the industrial revolution and powered presses and mass publication on a national and then international scale… then came the Internet, and with it a real proliferation of information exchange the likes of which the world has never seen before. Now a single person, even someone of modest means (by first world standards) can PUBLISH whatever he or she thinks or likes ANYTIME 24/7/365 to literally millions of people around the globe…

Humanity developed writing sometime between the 7th millennium BC and the 4th millennium BC. The first known book printed with moveable type was the, “Jikji” or Selected Teachings of Buddhist Sages and Seon Masters, in 1377... We have gone from there to anyone could PUBLISH anything electronically by the year 2000 (a bit earlier actually, but I’m generalizing here) in a mere 620ish years…

This idea and ability, personal publishing as mass media, is by no means over or IMHO, even past its infancy yet. Yes there are additional and newer technologies coming down the pipe… txting, tweets, etc. … I see these as ‘micro-posting’. Blogs are ‘mini-posting’, single topic multipage websites are ‘macro-posting’ and online magazines/sites with multiple writers both staff and free lance are ‘mega-posting’.

As for MMO gaming blogs specifically? Well, now that depends totally on where MMO gaming goes now doesn’t it? Give us stuff to write about, stuff that fires up our imaginations… and I’ll bet yer ass there will be blogs about it… don’t give us good content and challenge us, and just as surely… there won’t be.

2-And is there really a blogging community out there?  Am I just making that up in my head, or do you feel like you are a part of it as well?

(2) Yes, in the EVE blogshere at least there is definitely a ‘community’ in existence right now.

I say this from direct experience as I am a part of that community, and this post is a direct response to and product of that community. Community is usually defined as a small, social unit of any size that shares common values. In that respect EVE Bloggers are a community whether or not we interact. As long as we are writing and publishing on the topic of EVE Online, we are a community. But, in this particular community I have found a very strong sense of shared belonging and a desire to do more than just send our :words: out into the wide electronic ocean as one does a message in a bottle… But a desire to interact with others who share our passion for this strange and wonderful ‘verse we all live, and die, our virtual lives in.

Look at my blog stats page at the top of this post for example… I am not well known, not advertised and I run no advertisements, not affiliated or (to date) syndicated with any other site(s) and yet, since Apr. ’11 I have experienced a steady growth curve and a total of 40,000 pageviews from all over the world… US, Europe, Russia, China, Australia, New Zealand… even a few hits from Iceland!! and all on one topic and one alone… EvE Online. (Also, as you can see from my sites stats, 2494 pageviews have been directed to my little blog from evebloggers.com…)

This is just one guy, writing spastically at best… on a niche topic... without any overt promotion. 151 posts over 2 years and 3 months, averaging 4 to 5 posts per month with a high of 9 and a low of 1. My blog is, as I have said afore, kinda more a journal or log of Tur’s experiences and travels in and around New Eden, and on the other side of the sky in Anoikis…  I write about my personal game experience far more than the metagame, and as I write colloquially my writing style can be… off putting to some… I care not. I write for me… cause I have to, my muse gives me but little choice, and that is more when not if.

That there are those who follow me, much less take the time to put words to screen and comment, is flattering and fascinates me. That I like what I write does not mean anyone else will and when someone comments or better still, I get a shout out in local when in game while on our way to or from some op or roam or some such… it is a genuine thrill for me… I know then I am part of a very real community.