Just a quickie... Things have been hectic lately IRL and ingame...

SYJ entered ATXI (the New Eden Alliance Tournament '11' for them as dunt know)... AND we have been fairly busy with either that or some very very fun Blops Roams (talk about that later).

As for ATXI its a double elimination tournament with 64 teams competing. Each team gets 2 shots at a win to move up. To unnerstan more, Linky 1 & Linky 2 (courtesy of Ripard Teg at Jester's Trek) and if you wanna geek out on the ATXI kills and fits, Linky 3...

So, we went up against Nulli Secunda on Sat in our first match up and lost. But we didn't get wafflestomped and had one ship left on the field at the end... and for most of the AT matches that is not the usual outcome. So yea, we lost but we fought hard and felt we made a good showing plus it is a double elim, so we had one more shot...


And on Sun we fought MOIST. and won very handily! The turning point came 31 seconds into the match when we alphaed their logi before he even had time to get moving and that was that... It wasn't a waffle stomp on our side either, MOIST. put up a good fight and we were fairly well matched as far as fleet comps go but it was a clean win for us. 100 to 35 w/ 1:48 left on the clock.  =]


[Videos brought to you by Sai Talos of SWI in SYJ]

As you might imagine we are all really stoked. As an Anoikis Merc Alliance the AT is an Empire kinda thing and so a little low on our radar... we actually joined on a lark really and were surprised we got in. But once in we decided to give it a go wormhole and Joker style. You see we approach things a little sideways as compared to most of what we know about  Empire Alliances...

We know that most pick their 'team' and have backups to account for RL scheduling issues etc., but we kinda wing it a bit... there is a core group of guys, as is usual in any corp or Alliance who have flown together a long time and then there are the really 'leet' players amongst us... Every corp and Alliance knows who is their best, and worst...

But we have no 'set' team. We are a more fluid group and we have enough decent to good players that basically we throw together each fleet based on who's on and can fly 'this' fit and 'that' fit.

If you watched the vids, you know I was not on either team, I couldn't fly the comp for 1st fleet and was too late getting Mumble setup on my new laptop for the second... by just mere seconds too dammit as I can fly the frigs in the second comp!

Oh well, my CEO, AINeumann did get on the team and acquitted himself well... and our frigate support team made quite a stir at the end of the second match when, once the field was clear of MOIST.'s frigs, they turned their paints etc. on the remaining Navy Scorps... Then those frigs as had empty unneeded hi slots revealed that they had fitted Festival Launchers and plastered MOIST.'s Navy Scorps with Fireworks too!! 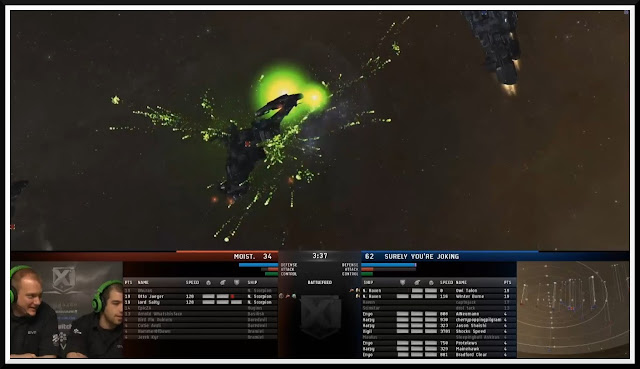 This was interestingly enough also done the day before (don't remember who) but it did not get noticed by the commentators and so went a bit unnoticed overall... whereas on Sunday our guys use of fireworks was definitely noticed and commented on and became a bit of a thing... Fireworks in the AT!?! Surely You're Joking... HAHA  =] 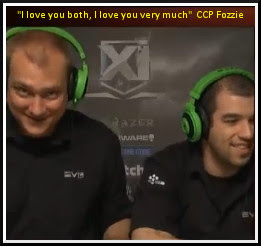 All in all a really great way to end a successful second ATXI fight for us and so we look forward to our third match next Sat.

On the RL side I bought my wife a new laptop & wireless printer (and in the process landed a new laptop for myself too, schweet!) plus all the normal summer is in full swing stuff... so as you can imagine I, like many of you, have been really busy, and in my case that eats into  my writing time... plus, I am summarizing one of our past Blog Banters so what keyboard time I have had, has been devoted to that.

Oh... and one last note gentle readers... I do mediate the comments posted here even if they are open to all, and any comments of a truly rude, unacceptable or really negative nature won't make it to the screen... and yea, this is in response to a oneline comment that I deleted. The very first time I have had to do that in the 2 years I have been blogging.

So Anons of the world, don't waste your time ok? I'll treat you the way we should treat all a-holes... you'll get wiped and ignored.