For Once, a Simple Sales Problem… 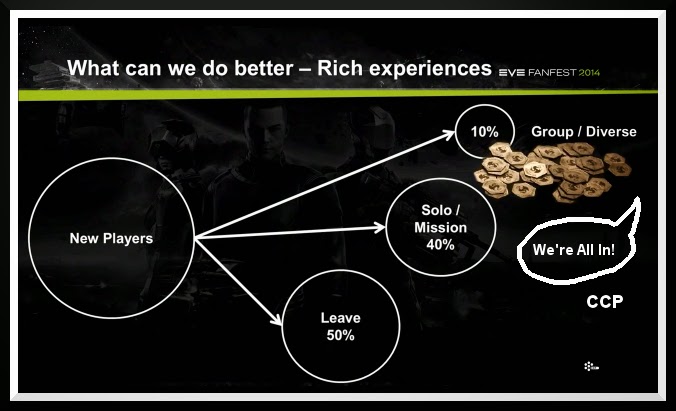 I was absolutely floored, stunned, incredulous and a little ashamed tonight when I read Jester’s post, “The seven percent solution”.

This shows how at the New Player Experience panel at FanFest this year, according to Ripard, CCP Rise made it very clear, as Ripard took it at least, that,

“…when new players pay for -- not try out, pay for! -- EVE, 50% of them leave the game very shortly after doing so (he implies their subscriptions last for one month). 40% of them move into solo activities, which he primarily describes as missioning. And in his words only "five to ten percent" join a group had have a diverse experience with the game.”

Ripard’s summation is as follows:

“Put another way, between 80 and 90 percent of all new EVE subscribers that stay with the game for more than a month (a) avoid playing the game with other EVE players; and (b) many will probably leave the game anyway.”

That’s right… 80 to 90% of all new subs that stay with the game for more than a month, and MANY will PROBABLY leave... Now Ripard in his usual style then poses a question based on this data, he asks…

“…if you were CCP with a limited budget to support development of EVE Online, where would you put your resources? If you think CCP should put more resources to this larger group of solo players, how do you think it would help?”

Yea… ashamed… ashamed that this question even needs to be asked, ashamed that CCP does not see the plain, and only answer.

I’ll simply quote myself in my comment on this…

“This is sooo bloody simple Jester I am ashamed the question was even asked....

CCP has never shown interest in competing in solo content-driven theme park MMOs. The fact that players drive content in EVE has always been the game's competitive advantage. But between 80 and 90 percent of new EVE subscribers are avoiding that game play.

If 80 to 90% of the people who try out your game leave, and they seem to be looking for good solo PvE gameplay.... FUKKIN GIVE IT TO THEM! Jezuz why is this so gods damned hard to understand??

(1) Give that 80 to 90% of players, who having played themeparks for YEARS and therefore only know themepark gameplay... Give them what they want... really top notch PvE... THEN once they are HERE, you have a shot at them 'discovering' (IE SHOW THEM) what real sandbox social gameplay is and how it can be soooo much MORE than Themepark solo PvE based gameplay...

Jezuz why is this hard to understand???? If 80 to90% of your potential customers are walking in, looking around for 15 minutes and leaving... the only possible  reason is, You are not selling something they want… IE, They are not the problem... YOU are.

Really? No interest in solo content CCP? How about this… 80 to 90% of your potential customer base WANT THIS.

Soooo…   Give ‘em what they WANT. Create and USE New Awesome PvE as your “CARROT”… Then you will have a chance to show Themepark Inculcated players that there is something different, something new (to them) and something really amazing and wonderful in MMOs… EVE Online’s Immersive, Deep, Intelligent, and the Emergent Player Created Content gameplay… whether solo, casual, small gang, large gang, very large gang or 10,000 player Empires….

They are NOT the problem.... YOU are. Give them what they want, and they will come.” It actually is that easy… am I the ONLY one who sees how incredibly simple this is???

About half of the New Players, who have actually subbed, leave after something like 1 month… but, 40% FORTY PERCENT, almost half…

Then he most tellingly says this…
“They’re pretty much just doing that, umm, you know, straight forward Themepark of, umm, sticking to missions and, you know, leveling up their Raven basically.”
“And for some people that really fits, uhh.”

He goes on to say about CCP Veritas that, “…for him this is actually amazing.” “He loves this type of gameplay and we have a lot of people who do, and that’s awesome.”

He then says,
“…but we’re definitely, we can see very clearly that our New Player Experience is pushing people this way.” “This is where they’re heading when they come out of it, and for many of them, umm, that’s not a good fit, and so, ummm, they end up leaving.”

He seems to ‘blame’ the NPE for this… as if there is something intrinsically wrong with it… saying, “…for many of them, that’s not a good fit.”… Hmmm… really? 40% of your new players, 40% of YOUR paying customers play this way. FOURTY PERCENT… and it’s a problem how?

I want to know, of the 40%, HOW MANY actually end up leaving? He doesn’t say. What he does say next is not about the 40% though, he says;

“We have this other small group, of, you know, 5 to 10%, that do move into a really wide range of experiences.”

Five to Ten Percent… that CCP Rise very very obviously feels is the be all and end all of the EVE Playerbase, He all but gushes with enthusiasm for all the things they DO get involved in… then;

“These people tend to stick with us. These people are, umm, are all of you guys most likely.” He says, looking at the FanFest audience, (laughs) “And they love the game and they stay with the game fer a long time.”

He follows with, “And to us that says that the more we can do to get people having the kind of experiences that this groups is having, the better off we’ll be, umm, because obviously for them it’s, it’s, it really rich and  meaningful and it sticks with them, uh, for a long time.”

He points (to a screen?) and says;

“And I have one more (something I could not make out clearly) ‘cause yes, we do have , umm, more often than not the people in this track tend to leave, whereas the other group, ah,  doesn’t.”

"...people in this track tend to leave..." I can only assume he was referring to the 40% as compared to the 10%, but I feel it is probably an accurate assumption.

He then states,
“So, the last goal we can take, is to encourage, uh, meaningful experiences as much as possible.”

Listen for yourself, don’t just read what Jester and I think…

I’m gonna stop there as that covers what I am concerned about… CCP is banking their whole roll on the 5 to 10% who play, they way THEY think we should play, IE “Meaningful Experiences”… in a sandbox game.  I swear I thought I had heard it all.

Oh, and one last thing… yes Jester, CCP has a “…limited budget to support development of EVE Online”… Do you actually know ANYONE who doesn’t?? Seriously, do you? I have been an IT Tech Consultant for 17 years… I worked a wide variety of jobs until I found IT… and I never have worked one day with ANYONE who actually had anywhere near the capitol or funding they needed, much less wanted,  to do what they wanted to… So what?

It’s not about the total of money you have available; it’s about where you spend what you do have. If 80 to 90%(?) of your potential customer base is walking out the door having found nothing they want… you had better restock, and do it quickly.