Sometimes You Gotta Change the Sand in the Sandbox

~or “Change Hurts Like Hell, Until it Doesn't Anymore...” 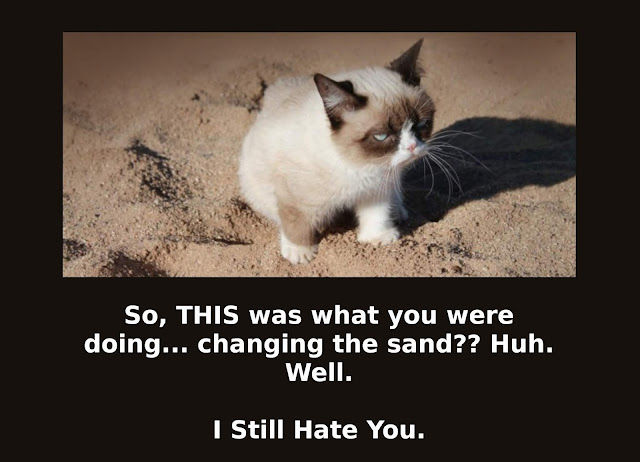 This is a post born of a the rummage of thoughts I have been having on the recent changes and direction CCP seems to be taking the game, and all of us, as we head deeper into The Chaos Era... which most definitely is Still Very Much a Thing in EVE. In a comment 'tween myself and Hermit, it all kinda gelled into this post.

If you are not a miner or involved much in Industry, as I and The Forever Noob are not (and though I have been on the other side of the lazers in a mining gank once or twice, it has never been my preferred playstyle) then these recent and seeming drastic changes to the game, what seems like a truly massive shit CCP is taking all over mining returns and ore availability, may not immediately impact you or your gameplay, yet.. However, those mining changes WILL be hittin' all of us in the wallet in the months to come, like a Dreadnought Alpha Strike direct to the Nads...

Actually go and listen to what Hilmar himself has to say YOUROWNDAMNSELF in this podcast where he introduced us all to The Chaos Era... and The Why. (the link is to the point where he begins to speak directly to the Chaos Era but I strongly suggest you listen to the beginning also). Don't wait for someone else to boil it down and tell you how to feel about what he says... listen for yourself. Decide for yourself. You may be surprized.

He actually does explain it all, and IMHO I think he does so quite well, if you actually take the time to listen and don't let yourself get all bogged down in little shit... don't sweat that Ashterothi makes a big deal out of his mistake of saying “Purple Donut” instead of “Blue”, he is being interviewed and by EVE Players none the less... his getting the 'color' wrong is a fukkin little ass thing ya'll, so please focus on what he says “about” the game.

About how EVE is stagnating, about how because of the Alliances, Coalitions, Peace Treaties and Agreements made between all the Null Powers That Be (the players)... that the Sandbox is turning to cement.

If you are interested in my take on this it is simply that because of us, a significant majority of the playerbase, EVE Online is dying. Not because of CCP, because of us.

That's right, I said it and I will say it again... because of us. Because we want to have control over what happens to us... because we want to feel safe and if possible, BE safe. It is as natural and human as sex or greed or empathy or anger. We want to be safe and do the things we enjoy and profit by from a place of safety.

No one likes Surprise Buttsex unless they are the one's giving it, and the Cyan Donut came about because we, the players, working Outside Of The Game, agreed to work together for Prosperity And Safety For All, which is how we ended up with the vaunted and reviled “Blue Donut” a state of peace throughout Nullsec that is enforced with tenacity, zeal and at a level that makes Concord's Law & Order enforcement efforts in Hisec seem like 2 guys with BB-guns comin to your rescue inna canoe...

This “Pax Congregatio“ is enforced throughout all of domesticated and peacefully farmed Nullsec, where tenement and sharecropping ratters, miners and bots are all treated with respect and integrity while being squeezed for every possible Red ISKie their Nullsec Overlandlords can wring from them.

Oh Gentleman's Agreement fights are acceptable and yes, there is always some “real” strife of course, WWB was a real enough thing, but once a Null Empire is established, the diplomats begin working in earnest to KEEP it established and to keep things inside their borders humming along productively and under a shield of safety that is a Hisec Carebear's Wet Dream...

Let's be very clear, people working together for Prosperity And Safety For All is exactly what is most desired and needed in the Real World ('cause no clones in the Real World) but EVE is not the Real World... it is a Virtual World filled with malevolence and hate and tears and greed and suffering and Ebil Oberlords and Their Miscreant Minions and Pirates.. It is a star cluster full of conflict and passion, fear and death, taxes and carebear tears and because it is all of this, it is also a 'verse filled with friendship, camaraderie, sacrifice, hard work and yes, love.

Without the Dark, one cannot have Light, without Grief, one cannot have Joy, without Failure, one cannot have Success. And EVE, EVE is not about Hugz and Rainbows my brothers in arms... Hugz and Rainbows, as nice as they are, are boring and now so is EVE as all of nullsec huggz and sways along to Kumbaya, EVE Online has become Boring... and CCP Himar my gentle reader, one of that small group of guys who together so long ago dreamed a big dream, a dream of a 'verse that is EVE... CCP Hilmar has decided to Go to War Against the Forces of Boredom... And that means against Us.

Because my brother Empyrean's... we suck at EVE, not CCP, us. Many of us, or at least a large and very vocal number of us are entitled, nasty, dreadful, horrid children and we have no respect for what CCP has created for us.
“We” have tamed EVE...
“We” have made EVE docile and safe...
and CCP Himar is pissed and he is going to DO something about it.

And I for one, think it's high time he did. 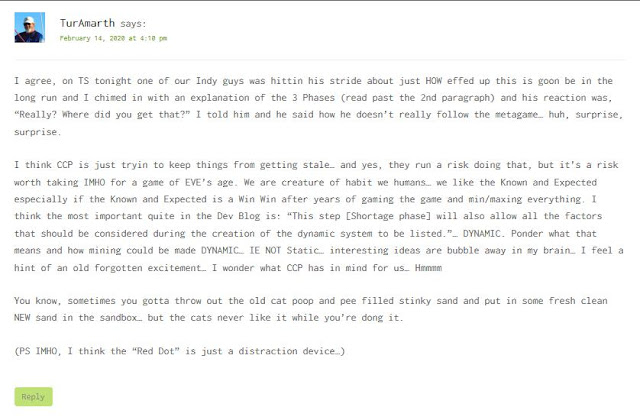