Borgin For the LULZ…

or~ Are the Goon-born the Borg of EVE?

Recently I was reading through The Mittani’s posts on Ten Ton Hammer… just to slake my curiosity as ‘twere. I am, at best, ambivalent about Mittens and the Goons. They are a part of the warp and weft of the tapestry that is EVE. In the game I play though, they are like the weather in a far off land… inevitable, interesting and generate a lot of dialog, both pro and con, but so far they haven’t really been a part of my game on a personal level... Their greatest impact on me has been mostly when they manipulate the market… causing prices to do this or that… and, well, they’re not the only ones who do that are they? Not much I can do about it either way so I either pay the going price, warp around lookin for a better price, make changes to my fit/requirements… or I do without.

Being a carebadger and a wormholer, and as my blog is moar personal journal than metagame commentary, I have never had much to say about Mittens or the Goons and while I may disagree with their playstyle, I still believe strongly in the sandbox ideal… and no matter who you are or what your gameplay in EVE is, they do help to keep things from getting boring in the sandbox. I must say I found the ‘Sack of Jita’ a very interesting bit of emergent gameplay… Now with the current furor over their ‘FacWar LP Exploit’ and after reading Mittens post, The EVE-Born, I found myself wondering about the differences between players like me, an EVE-born, and the players Mittens describes, the Community-born, or ‘Goon-born’.

I keep trying to imagine what EVE is like for them. How very differently they must perceive/feel about/value EVE as compared to the rest of us. I know that for me the experiences I have had and will have in EVE are of great value. EVE is, for me, a very ‘real’ Virtual Life. How must it be for someone who skips the formative experiences? What would it be like to play EVE with NO investment? to have someone mentor you on exactly what skills to queue so you are sorta hand-held up the Learning Cliff? to NEVER have to make one little red ISKie on your own?

It’s the age old conundrum…
Make your kids work for the things they want and they learn the value in that labor…
Give them everything for free, and nothing they have has any value to them.

The EVE-born work for every ISK… but if the Goon-born are, as Mittens says, “…ushered into massive alliance warfleets, mentored by veteran players, and showered with isk and ships.” Then how can they value any of it the same way, to the same degree that we do?

The EVE-born play the way I believe CCP thought was ‘standard’... we all open an account and start as noobs, we all experience a ‘noobhood’, if you will, where we all have to slog through similar rites of passage and we all learn the ‘ropes’ of EVE in a similar manner. Due to this a high percentage of us do end up, as Mittens put is so well,  “…one might consider default EVE-born society a Culture of Honor…” but…

The Goon-born are an emergent form of player… instead of being ‘born’, naturally if you will, IN EVE… they are gestated outside of the game. They basically are Goons before they have a toon in New Eden. They miss (avoid?) the shared experiences and investment in time and the effort and angst of noobhood and the stress of facing the Learning Cliff, they never know what it is like to ‘want’ a Stabber… and not have enough ISK to afford even the Skill Book. They never know what it is like to ‘mine veld in a Bantam’ just to make the ISK to buy the book to learn the skill to fly the ship… then back to ‘mine moar veld’ to afford the ship itself.

They simply cannot have the same investment, intellectual and emotional, in New Eden that the EVE-born do… they decry it as ‘just a game’, and to them… that’s all it really is, or ever will be… all it ever CAN be. So they can run scams and bots… engage in corp-theft, griefplay and the harsher side of piracy with a clean conscience because they never learned to LOVE the game the way the EVE-born do. We all know the “Golden Rule” of EVE… Don’t fly what you cannot afford to lose… only… the very newest of Goons can afford ANY ship in the game (they are given the skill books and mentored on the fastest skill queue for any given ship & role)… and once skilled in any given ship, they can afford to lose them over and over and over… think about what that means.

I am not denigrating the Goon ‘experience’ or their involvement in EVE. I am simply trying to understand the differences between us and them. Now when I read their posts on the forums… with my new perspective on them… I can better understand their mindset. This does not mean I agree with them or ‘see’ their side as reasonable or acceptable, I can’t and don’t… I was born here, this is my Virtual HOME. EVE ‘means’ a lot moar to me than just pixels on a screen. I realize fully that my interaction with and within EVE take place on a PC screen… but my ‘involvement’ goes far, far deeper. In my virtual life I grew up here… I have a ‘continuum of existence’, memories of learning and experiences of growth that the Goon-born, brought into the game the way Mittens describes, miss out on completely.

I cannot help but wonder if the Goon-born see the EVE-born the way the Borg see all life in the Star Trek ‘verse… as nothing moar than a resource. They don’t see us as people much less as equals. We are Pubbies, Noobs, carebears… Tear Production Units… ISK Generation Modules… cattle… but not people worthy of respect and equality... and, due to their stunted upbringing, they are unable to… and never will. Like the Borg. with all the evidence online, ingame and at hand I do not believe they can ever be negotiated or reasoned with… what we have that they want we cannot ‘give’… part of what they require to fulfill their desires is, in essence, that it is ‘taken’ from us by force of arms, ‘scammed’ from us by their perceived superior gamesmanship… remember, as the Goons love to say "We're not out to ruin THE game, we're out to ruin YOUR game."

So how do we counter this mindset? Honestly, I’m not sure we can unless the great majority of the EVE-born… those independent, self reliant and proud spacers, could come together and form a United Alliance of Planets, or maybe an EVE version of  NATO… NETA, the New Eden Treaty Alliance… an EVE wide superalliance of the EVE-born to hold back the Borg… 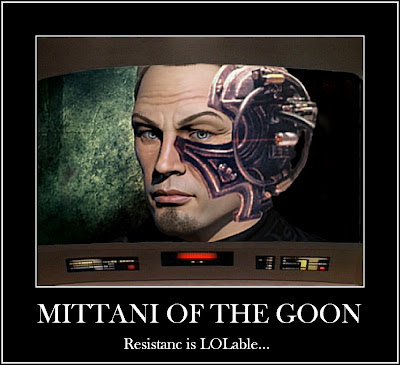 Here are a few to the point quotes from his post, The EVE-Born: (Italic mine)

“The average EVE-born starts life alone and confused in Hisec (Not true… myself and so very many I have known had a wonderful noobhood… easy no, fun YES!). Friendless and bewildered, (Not true for all… many players join EVE directly due to friends) they try to ascend the learning cliff. Most begin with safe PvE activities, mining or running missions. After a while they may find a corp, and after many months they may - may - dare to try out PvP. (Again, I call BS… a high percentage of my EVE-born friends jumped into PvP very early… right after being ganked, mission jumped, etc., etc.)…”

While some take the plunge into scamming and piracy with relish, most players try to keep their noses clean and behave with ‘respect’- one might consider default EVE-born society a Culture of Honor, often referred to as ‘e-bushido’.

“The experience of a new Goonswarm player is radically different from that of the EVE-born.”
”…when they install the game they are an extension of an existing community…”
“Rather than learning the basics alone in hisec, on their first day newbie goons podjump to deep nullsec. There, they are surrounded by their fellows, ushered into massive alliance warfleets, mentored by veteran players, and showered with isk and ships.”

“A community-born player is able to entirely skip the dreaded ‘mining veld in a Bantam’ phase. Instead of a positive kill/death ratio, external communities place a greater value on enthusiasm and a willingness to die for the group.”

“In practice, this means that Goons, Broskis and Redditors can be outright bastards to everyone else in the EVE - besides their allies, of course - and get away with it. The game’s normal culture of honor doesn’t apply…”