I wake in the POS… This hole is so very different from our old home… The C2 had a Red Giant sun and a very different sky with a lot less nebulae. The new hole has a G5 ‘Yellow” sun and has a very pervasive nebula so it’s pretty much like living inside a cloud. It’s very… well, white… ish… all around… everywhere. I loved the weird ruddy red light that was diffused through AI’s Great Wall ‘O Bubbles… if we put up a bubble wall in here it won’t diffuse the light any at all as it feels like we have the ‘verse’s most pervasive indirect lighting… it’s… well… I dunt like it nearly as much as the blue black sky of the old hole…

Anyhoo, I awoke in th’ POS and AI & Ty were both on and wanted to go raid the K162/C2 they had scanned down and asplored. I wasn’t really into it, and wanted to work on the POS mods… I had both North and South Defense Positions completed, and the Alpha Ring had all sixteen guns and most of the Ewar up in all eight positions. The Beta Ring was missing three full positions and was very incomplete on the other five… I was, rudely interrupted, by a ganking th’ night afore which was why I kinda had my panties inna bunch to get all the defenses up.
So… they went a raiding and I started workin on the POS defenses. I got all three holes on Beta Ring BM’ed and then anchored both guns in two of em and the last AC in the POS in the last… I was working on the books when the guys were getting near the end of the raid, which had gone very well as they were flyin C3 fitted ships, a Mach and a Kronos… The Mach flat out rocks… I have one and will bring it in ASAP as it is Sheer Deth when well fitted.
The Kronos I found is a very interesting ship. It’s a Gallente Marauder and is especially effective at support suppression and ‘wreckage salvaging’... so AI is doing the ‘tractor everything into a wreck blob’ thing. We tried this before and it worked out well, as we take down a site he tractors all the wrecks into a blob and loots em then I reship, or in this case join em in my Noctis as I have the highest salvaging skills etc., etc. and I land on him and salvage everything... we tried this with me dropping the usual 4x4 Tractor IIs and Salver IIs and refitting all the highs with eight Salvager IIs… this cut the salvage time down appreciably, sweet.

So, the guys let me know they are on the last site and to prep for salvage ops. As we are ‘raiding’ though, I drop one of the eight Salver IIs and add a cloak and change all three the lows to warp stabs, JIC you know… then I warped out to the C2 EXIT BM, cloaked up to await their call to warp in and...   uh…   no hole… uh oh.
“Uh, guys? Wanna check the return BM on your side?”   “HUH?”   “What??” AI warped to the return BM and… nope, no hole. Oh shit. And NEITHER of em has probes or a launcher. Oh fukmerunnin! We now have a Mach and a Kronos ‘lost in space’ in a hostile C2. Yea, there’s moar than one ‘live’ POS just no one awake in ’em ATM… and so begins the first HBHI Two Man Great Wormhole Adventure…  LOL
Inna vain attempt at sympathy or ransom, AI wrote to the CEO of the corp with towers in the C2, then logged for the night.
Inna vain attempt at infiltration, Ty prepped and alt and applied to the corp in that hole, then logged for the night.
Inna vain attempt to refind the lost C2 in the local W-space constellation, I stayed up and scanned and ‘splored all the holes in our current constellation.
I Scanned eight holes to Empire dead ends… two Null and two Lo and a Hi… I was starting to see dubble when I was in the C1/Lo and dint need to resolve the Lo as the guys were inna C2… and I hadda put her back in the barn afore I crashed, so no joy. Oh well, I tried. 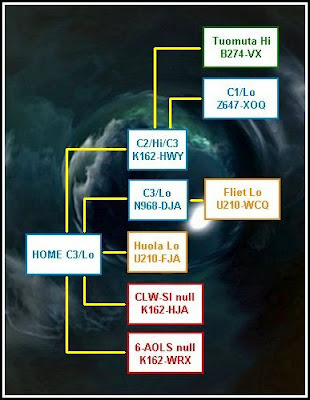 So I get a message from AI today that he had been in contact with the CEO of the C2 corp and that put him in contact with a corpie in the C2 and 100M ISK later, AI was allowed to warp out to Empire space unmolested… OMG! Schweet! AND he says they were OK guys and we may have just found a corp worth knowing… This good news was somewhat tainted by Strigon’s impatience… you see he self destructed his Mach rather than mess about trying to get out… he just couldn’t wait…  =O
Goes to show you what a little patience and faith can win ya in the deadliest space in EVE… a saved Kronos (and POD), a lesson learned the hard way (Core Scan Probes, NEVER leave home without em!)(keep in mind my Noccy dint have any Probes either… LOL)… and just mebbe, some new friends to boot.
Fly Safe and see you in the Sky  =/|)=