Team A Losses: Nothing to Display Here...

or~ The Classic Wormhole Hotdrop.

The night started kinda quiet for me. Buncha guys on COMMS but nothing much going on. I was just getting ready to run my PI for the night when Pell says he has a guy wants us to help him take down 2 Orcas and some mining barges inna C2 he found… huh. As the guys discuss the possibility that it might be, in the immortal words of Admiral Akbar… 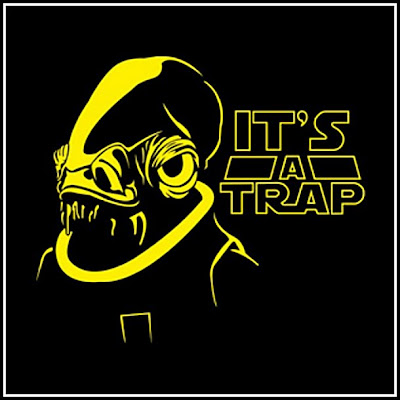 I’m messing around trying to decide if I want to join up because Pell is telling us it’s in a C2… 14 hops thru Empire from our current pipe AND we have to hurry cause our static is EOL (End Of Life)… so I’m waffling trying to decide if I want to leave the hole again. The last time I did I got sorta trapped in Hisec for a few weeks and I din’t like it and dunt really wanna get trapped there again for a while.

My PI is running well, I’m seeing something like 300 to maybe 500mISK a month steady there AND I have been able to sell quite a bit of it in the hole every now and again which is very sweet as that cuts the hauling out to Hi and waiting for it to sell on the market… I only do quick sells if the price is 5 or sometimes under 10% of the current lowest sell price, if not I put it up competitively and wait.

But, Pell has an infectious way about him as an FC and Alliance Leader… I was in my Cloaky Loki and finally the lure of being in on Orca kills, which I had never had, and the fact that I recently got paid for several site runs and ‘The Japanese Job’ (the 2 Towers we took down some few weeks ago, post: "I am Become Death...") so my wallet can now ‘afford’ a Loki replacement decided me and I asked if a Cloaky Loki was OK, was told it’s fine, Cloaky Kitchen Sink Fleet was the order of the day so I got a warpin to the Static and on the way a ‘Dictor was requested, I offered my ‘Sword and was told go get it, but be quick!

I landed, BM’ed the static, warped back and reshipped (with a small sigh of relief as I can much more easily afford to replace my Light Interdictor than a Loki TBH…) and headed back out. We staged on the static, finally Pell asked, “…last call to join up… any takers?” on getting no reply he ordered, “Everybody, jump the static.” we jumped ran the pipe and then ran the 14 hops to the lowsec the C2 was in.

On arrival we had 13 in fleet… 6 Cloaky Lokis, 1 Cloaky Legion, 1 Manticore and our non-allied scout inna cloaky Tengu and the non-cloakies… 1 Sleipnir, 1 Legion, 1 Purifier and me in my Broadsword. All the cloakies jumped the hole. The Mining Op was in Dscan range of the hole, so on command they all broke jump cloak and recloaked as fast as possible. Then they scouted out a 200km high pounce over the Op. There were 2 Orcas, 2 Hulks, 2 Mackinaws and a Tengu… and not a one reacted at all to a FLEET of 9 cloaky ships (1) jumping their hisec static and (B) being visible on DScan for several seconds as they broke and recloaked…  idiots.

The non-cloakies were ordered to warp in and sit on the Lowsec side of the entrance hole... still no reaction so they did not have scouts on either side of the hole and they were not really watching DScan. Finally, when everyone was in place, the FC ordered the Cloaky Fleet, “Uncloak and warp down.” He called primaries and secondaires then called in everyone outside the hole to “Jump, Jump, warp to Pell, warp to Pell.” We all jumped and warped in as quickly as possible. As we were doing this we listened as both Hulks and Macks went down and their PODs escaped, the Tengu was tackled and was fighting back as we landed.

The guys were calling out “Get the bubble UP!” “Get the bubble UP!” as I was landing. I called out, “Bubble going up.” as I spammed the Warp Disruption button… once I landed and bubbled up I targeted everything not ‘us’, both Orca’s and the Tengu and joined my 425mm AC IIs DPS to the focused fire of the fleet. As each of the remaining, and now seriously trapped, ships went down their PODs were trapped in the warp bubble and all three died as well… We looted the wrecks for the highest value loot, popped the wrecks and warped back to the hole and out.

We all felt really good as this was as close to text book execution of a small gang wormhole hot drop as you will ever see. And the defenders lost for one reason and one only… they had not maintained “Situational Awareness”. They should have had the Tengu cloaked and sittin ON the hole to give early warning at the first sign of ‘blue-fire’ or if he saw a ship jump in. ‘Blue-fire’ is the term used in holes when a wormhole preflashes as a ship jumps, similar to ‘Gate-fire’ or ‘gate activation’ in Empire. They should have mass closed ALL the holes into their hole and then had probes out to watch for new Sigs.

They were mining into the Orcas, they had 6 targets on the field and 2, the Orcas, were HVTs (High Value Targets), and only one uncloaked defender. They were most likely actively mining but just relaxed and chatting it up on comms… whatever they were doing it was NOT the way you mine in Anoikis space… not if you want to survive.

I have called “Mining in Holes” the “Deadliest Job in EvE”… And actually it doesn’t have to be, as long as you keep your head on a swivel, your eyes on DScan, and practice proper Hole Control. I actually bought a Retriever from an ally recently for mining in our C6. I now spend some time mining there whenever things are slow to support Mab in his Industry Projects… and I worry less in Bastion than I ever did in any hole I have ever lived in.

This is because we have our Alliance, 17 corps in there, so there are always many guys in the hole, some permanent some transient but always there are experienced wormholers, Situationally Aware and constantly, out of sheer habit, keeping tabs on the sky and the holes currently open in the homehole. So far in my time in Bastion EVERYTIME an unusually named ship or any probes appear on scan several people immediately ask “Who’s ship/probes/etc.?” until we all know what is going on and either a warning is given or one of us gets trolled for not warning in advance or for his crappy ship name etc., etc.

So when I am out there in the truly deadliest space accessible from New Eden… sitting dead still, my mind going numb to the drone of the mining lazors, waiting for my Retrievers immense ore hold to fill, I too spam DScan, keep my head on a swivel and keep an ear on comms, but I know I am not alone… that my corpmates and allies are out there with their eyes on the skies too… I will never end up like the guys we killed last night… and they could have avoided it too. 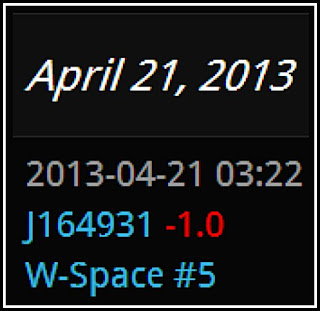 In Empire you have CONCORD and an expectation of at the very least immediate retribution for a criminal act... In Lowsec you have a lessened degree of CONCORD response, but it is still there... In Nullsec you have the highest possible safety available in or out of New Eden as enforced by the Forces of the Big Blue Cokkring... But there are NO GANKS in Anoikis because there cannot be be ANY expectation of ANY level of safely in Wormholes. These were guys running a Hisec style Mining Op in Anoikis... and they paid for thier ignorance in spades.

My biggest dissapointment of the whole night was... I din’t FRAPS the whole thing... crap.  =\