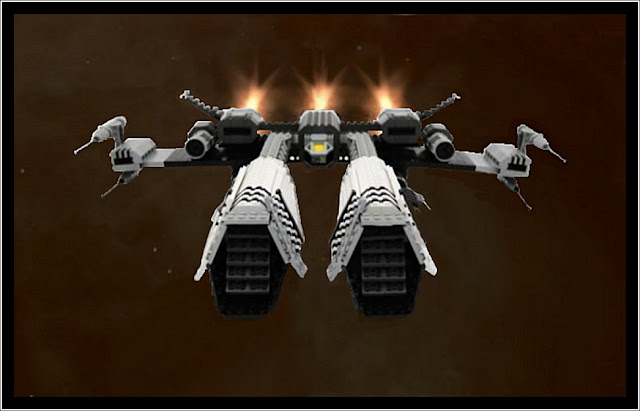 If you have the love for EVE at all, you now have no choice but to go here and do this, SUPPORT.
OK, this is just a quickie post to bring you news of, and ask for support for, the "EVE Online Ships - Rifter" Project. I saw this a while back and I support it fully. I just now (1) saw we had gone over 500 votes (over 5000 now) and (B) I saw Seleene is onboard and supporting this so... to quote our new CSM Chair,
"...I have to take a moment to get the word out about something so ridiculously awesome that you must know about it right the hell now."  =] I agree and dearly hope that this could potentially lead to LEGO Hounds and LEGO Maelstroms and LEGO Nidhoggurs... and maybe even a LEGO Noctis!!. I want ALL the "Ships of EVE". However, for this to become reality, some help is needed.
This LEGO CUUSOO page needs 10,000 support votes in order to be seriously considered by LEGO. There is a short registration process to go through, DO EEET!; Then click "SUPPORT"; then send the link to your corp, your alliance and your WTs!! This is a project to get LEGO Corp to make EVE Internet Spaceships a very SERIOUS BUSINESS indeed...  =]
If the number of supporters hits 10,000 then LEGO will seriously look at working with CCP to produce official LEGO products for EVE online.
How freakin cool is THAT!
Moar Links:
behemothjosh's photostream
The Rifter is #3!!! in the Top 10 for last week,
2012/03/23 Congratulatory message from LEGO for +500 votes
As of this post, 5,342 Supporters... Fellow Pilots, we are moar than halfway to having an "affordable" model of your favorite EVE spaceships... only 4,658 supports to go!
Fly Safe and see you in the Sky  =/|)= 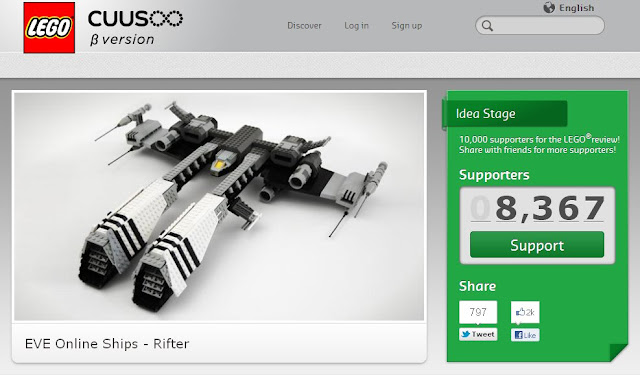 At the 5000 vote level LEGO states, "...at this stage, one of our model designers produces a concept model. Right now there are a few projects in line for one ahead of this, so we won't start right away. We'll build one once we are able though, and will keep you posted here."


Let's give LEGO a reason to get working on that pre-production model!!  =] 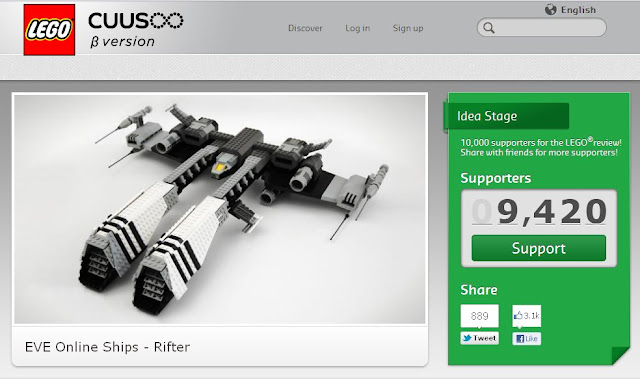 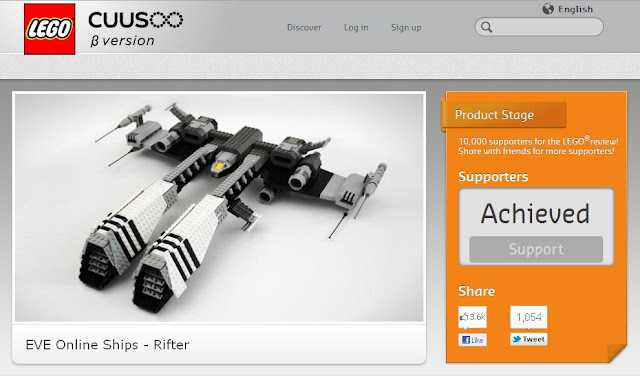 You've done it! You and all of the EVE Online fans voting for this have together achieved 10,000 supporters for the EVE Online Ships - Rifter project. We're fans of awesome spaceships too, so we're excited about this one.

You've built quite an impressive LEGO Rifter. It captures the essence of the ship with LEGO bricks, and it will serve as a good starting point as we explore the possibility of transforming this into a LEGO product.
Congratulations on achieving 10,000 supporters. We now officially advance this project to the Review phase.
Now.... what ship do we ask for next?   =]

Seems unlikely we will ever see a LOGO Rifter, or any EVE Online ships, for sale anywhere at any time... Why? We're BADDD people...

The FireflySerenity playset did not pass the LEGO Review for, and I quote,

"...we have decided that as cool as the Serenity model is, the Firefly TV show and Serenity film contain content that is not appropriate for our core target audience of children ages 6-11."

If Firefly was to harsh for em, how do you think they will feel about us?  It's a Godsdamned shame...
See  "BrandStandards: What makes an appropriate LEGO product?"
Posted by Turamarth Elrandir at 4/05/2012 01:22:00 AM