or~  “Mittens Fiddles (with the Market) While Jita Burns”… 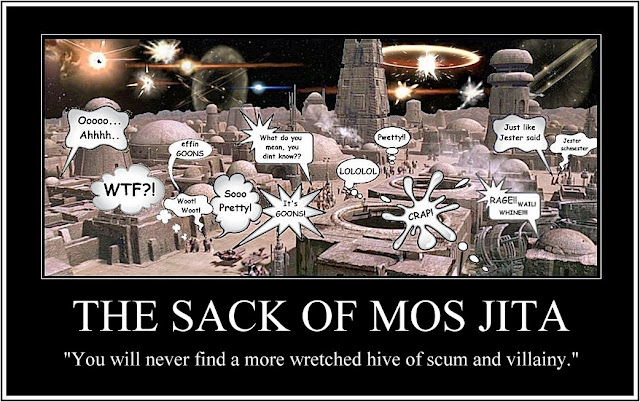 So many wrecks... so little time. I was just a lurker at the Sack of Jita, dint really join in the fun so much as warp around watchin. I had an A-Lt in Jita and a Ninja Salvage Vigil and a Cloaky Hound. I logged in when I read, courtesy of Stabs at Stabbed Up, that it had kicked off 2 days earlier than announced and 1 day earlier than leaked… LOL.  'Goons' and 'honesty', 2 words used in conjunction only in jest.

Fig. 1 – The Sack of Jita 4-4 Begins, the view from 400km out.
“What I Saw”…
Basically on kickoff night it was really something to see. I logged on my A-Lt, undocked  and from the Jita main trade hub at the Caldari Navy Assembly Plant at Jita Planet 4 Moon 4 (Jita 4-4) and spammed ‘warped to’ to an instawarp I have 2000Km out from the undock… and (1) instantly realized TiDi (Time Dilatation) was at 10% and working very well and (B) as I  s l o w l y  warped through a butt-ton of flashing bright orange ships at the undock (Fig. 1; I had not reset OV from my Null Neut set) and I landed, at 2000Km, at the end of an amazing string of ships that were strung out all the way back to the station.
I warped out to one of my overwatch BMs and started watching… I soon realized that:
1.      I could not see the station for the mass of ships. See ‘Fig. 1 & 2’…
2.      I did not see any CONCORD ships… I thought CCP had mebbe turned off CONCORD as there were no CONCORD or CalNav NPC ships visible… then I saw them in the OV at the same range as the mass of private ships…  huh? Turns out I could not see the police and Navy NPCs due to the MASS of private ships occluding the station! 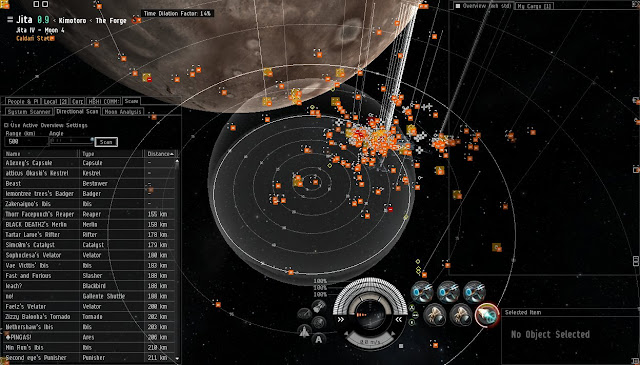 Fig.2 – TiDi @ 14% / 2100+ players in system
Wow. Impressive to say the least… and this was with approx 2100+ players in local, which is about 600 over the rough norm of 1500 players in Jita at any given time. But I think, mebbe, there were moar players outside than docked which is far and away not the norm here.
I kept seeing muted and hidden hints of explosions in the mass of ships and every now and then a ship would pop outside of the mass in a bright clear flash of bluewhite death light... I hit ‘CTRL-F9’ and cleared my screens and HUD of all Nav and Tac displays and I was graced with a view few will ever see… keep in mind TiDi was running at an average of 10 to 15% so I was watching in slowmo as twere… but (Fig. 3)… the Jita 4-4 dock was on fire!

Fig.3 – The Dock is Afire!!
As you can see above, it was really something to see.
Then I got interested in mebbe doing a little salvaging… so I switched to my 'Salv Only' OV Tab and… OMG, the wrecks were appearing and disappearing (A) in a near continous ripple and (2) FAST (keep in mind TiDi is runnin at 15% ). The dock was a steady slow motion rippling flash of bluewhite death pulses… actually quite mesmerizing to watch.  =] Oh, BTW in Fig. 3 the blueflash you see at the dock is approx 3 ships exploding basically all at once.
I tried to estimate whether or not I could effectively warp in range and actually have a chance of salvaging but I decided it would be problematic even with TiDi working so well and TBH I was moar interested in the spectacle than profiting thereby. So I just flew around and watched, took some pix and chatted w/corpmates on TS.
The next day I logged on and saw the following, which some are taking as CCP trying to nerf the Sack of Jita…. dear scrod! The 'Advisory' was put up well AFTER the SoJ started fer krist’s sake you effin whinybears…   =P

As things sort settled down after the initial huge numbers of ships ganking etc. I did give salvaging a shot and with my skills and very fast ship and dual sebos I got about half the wrecks I was able to lock onto… considering the sheer numbers of salvagers in competition I was not unhappy with my performance.
I did get a very interesting inmail yesterday from a Goon who stated I could buy an 'Opt Out from Burn Jita' (on effin SUNDAY) for only 250M ISK… yes, right.  OH AND as Bur Jita was soooo very successful they have, “decided to continue to burn Jita for the entire month of May”…  uh, yea… right.  LOL
BEGIN QUOTE:
(my A-Lt),
Burn Jita keeps rolling, but you can still opt-out!
From: Zombie Donkey
Sent: 2012.04.30 05:44
To: (my A-Lt),
Hello,
Don't let this happen to you!
This pilot gambled and lost a fortune!
Not even industrials are safe!
Whether 30b or 30k in the hold, no freighter is safe!
Burn Jita has been quite successful for Goonswarm Federation, both financially and as a morale booster.  Thus, rather than ending Burn Jita this weekend, we have decided to continue to burn Jita for the entire month of May.  However, if you'd rather not play, we understand - that's why we're giving pilots such as yourself a chance to opt-out!
Allowing select individuals to opt-out is our way of ensuring that we continue to have access to well-stocked markets in empire. You can read more about the opt-out program here For a one-time fee of 250M, you will be allowed free passage through Jita during the month of May. In the unlikely event you are accidentally targeted, you will be fully reimbursed for your loss.
As an official representative of the opt-out program, I would be happy to get your name on the list. Please send a payment of 250M to "List Processing Inc" [CLISP] with the reason "burn jita opt-out" from each pilot you wish to put on the list. Please, feel free to contact me in game if you have any questions.
END QUOTE.
Some Links:
EVE-KILL (Jita KB Stats)
Burn Jita - First Night at the 4-4 Undock  (YouTube)
Had to add this one! Thanx to Jester...
Nyx undocks in Jita!
Fly Safe and see you in the Sky  =/|)=
Posted by Turamarth Elrandir at 4/30/2012 04:55:00 PM